Back to Blog. And Catching Up! Part One.

Hey everybody!  There’s been quite a lot going on in the world of Atypical60dom.  I want to apologize for a lack of posting but I’m back in bizness and happy to be back to blogging!

The temp gig ended.  My tasks were completed and I have to say…. 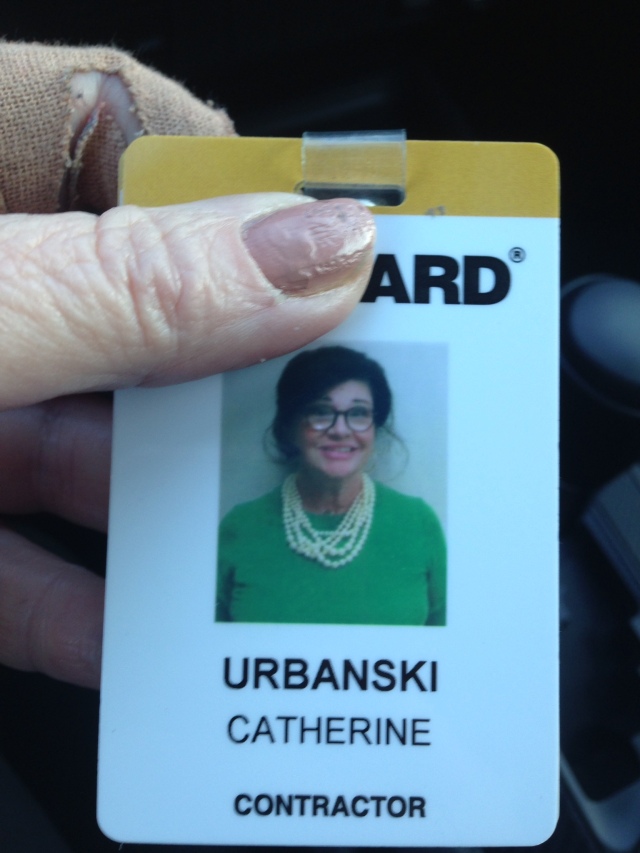 I look like the drunken Aunt on St. Patrick’s

It was great on so many levels. First of all, I felt validated. Remember how many times I whinged and whined about nobody not wanting to hire me due to my age?  Well, it was nice to have been a small part of a corporation where age didn’t matter.

In fact, it was the greatest corporate culture I ever worked in next to when I worked down on Wall Street.  The people were respectful. There was no micromanaging. People said hello with a smile on their face.

It was awesome—and the one possibility that kept me from staying was the company had become acquired.  I’ve been through that. Twice before.   So I know what the people who work there are going through emotionally. It’s tough…..

Well then, I must be the Einstein of the blogging world because I worry and suffer from supreme Anxiety!

….and speaking of emotions, I’ve had a stressful few weeks.  Those pesky lady parts exams and skin checks.    All is well.

Yesterday I had my semi-annual skin check.  My insurance doesn’t cover the costs. So much for affordable health care in the State of Pennsylvania.  Luckily, I had money left in my Health Savings Account to cover the cost.  Then I had to get a “thing” burned off my chest. So that was another out-of-pocket expense.  But knock on wood—it’s all ok.

Growing old sucks sometimes in the fact that you are always “checking” for bad shit.

Then I got the news that another aunt passed away. My dad’s sister, Catherine.  She lived a nice life but her heart stopped beating at 88 years.  She always seemed so much younger than her years. And I swear she was the only person ever to come from Brooklyn, NY without that Brooklynese accent.  Her speaking voice was so resonant and articulate—it was almost unbelievable that she and my dad were from the same family.

Aunt Catherine was also one pretty forward lady.  She worked in Manhattan for years and lived across the river in New Jersey!  A true city-girl, she never learned how to drive—which brings me to one of the funniest things about her.  She hated being in the car—especially when the kids were driving and she would always be the nervous passenger with the rosary beads in her hands actually reciting the Mysteries of the Rosary while in transit.  When you are in bad and horrific traffic, with a ton of lunatics on the road, this Aunt Catherine as passenger thing could get pretty hysterical—in the most funniest of ways! 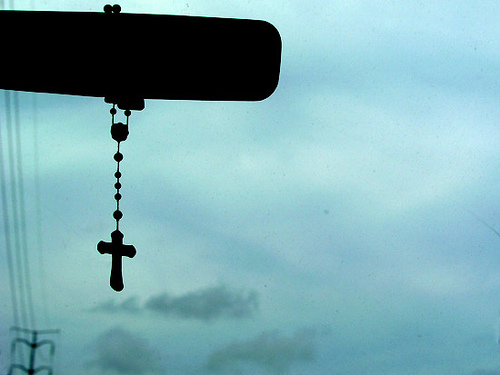 If Aunt Catherine was in the car, THESE rosaries would NOT be hanging from the rear-view mirror. They would be placed in her hands!

Bonaparte is still a bit under the weather over Danièle. Add to the fact that his last surviving aunt passed away a week after Danièle.

And then the Paris attacks.  Our world needs fixing.

We are all still hurting over the Paris attacks. When will our world go back to being kinder and more peaceful?

NOTE TO SELF: As older relative you must make each day fun and delightful and live life with more gusto.

So to get me in the festive mood, I started Christmas decorating. I know. I know….this is the earliest I’ve ever done this.  I’ve always waited until after Thanksgiving but with the stress of doctor visits, and the angst of final good-byes to many older relatives in such a short time and the events in the world, I want happy!

Chateau Bonaparte is starting to look festive and happy!

The first wreath of 2015 Christmas season hangs on the front door of Chateau Bonaparte!

Let me tell you about the “Prepping for Christmas Decorating” day that I had yesterday….

Got up and made sure I was in comfortable clothing.  It is still unseasonably warm here in the Philly ‘burbs so luckily, I didn’t have to bundle up…

I get very methodical when I’m on a mission such as this.  Really. I’m not kidding.  I take a deep look (me, being the deep thinker that I am) not only at what I need, but the route I will travel.  In addition, I try to hit the store that opens the earliest and make my way around that.

First stop:  Target.  One of Oona’s friends picked up the greatest Christmas wrapping of all time. All. Time!  She posted it on Facebook.  I had to have that wrapping. So I sent her a message. She replied that the wrapping was from Target. Off I went.  Naturally, it was just my luck that I couldn’t find this spectacular gift wrapping.  While cursing Target’s gift wrapping buyer under my breath, I was ready to leave when I spotted the last roll left.  I grabbed it as though I were a crack addict going after a fix—and literally ran to the check out!

This stag head wrapping paper is epic. I love it! Makes my Christmas a bit merrier!

On the way out of the store, a very chivalrous man opened the door for me with a big smile.  Either he thought I was a very beautiful mature woman whose looks just stunned him or he saw the look of a madwoman on my face and opened the door out of fear. I’ll delusionally go with my first thought.

Second stop was Wegman’s to pick up some groceries that would keep in the car for a few hours.  At 8:30 in the morning, I was shocked at how crowded the store was. Oh. Wait. Thanksgiving is next week. 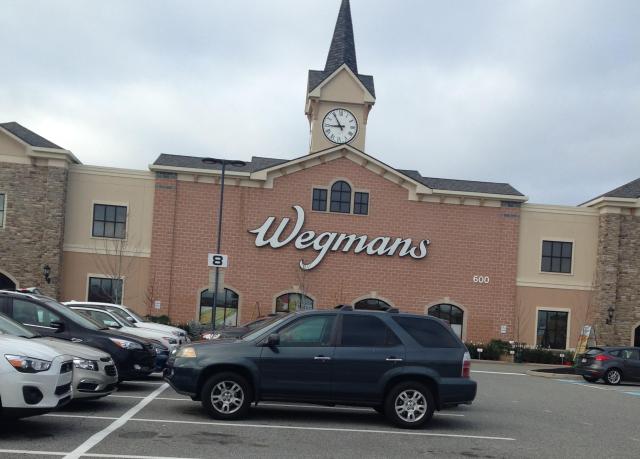 Wegmans in Collegeville is always crowded no matter WHAT time it is! Ugh.

Next was a stop over to Michael’s craft store.

I’m now wondering if the parking lot at Michael’s was empty because so many people are offended by the scent of those cinnamon and spice pinecones!

I had to make sure I had Tylenol with me. There is a reason for this.  Scented pinecones. Those fucking things ruin my holiday shopping.  I ran out of the garland that I had. It’s nice. Green fir with UNSCENTED pinecones scattered about.  I’m sure there is more of this garland somewhere in the garage, but I just could not be bothered looking for it.  So I get to Michael’s, and the parking lot is pretty-much empty. This is a good thing because I will be in and out.

I entered the store and the scent of fake cinnamon shit hit me hard.  I had to hold my nose with one hand and wheel the cart around with the other. My eyes started to tear up. Yes. I AM that allergic to that horrific fake scent.

These things are THE most OFFENSIVE items ever. They actually ruin shopping for me. Am I the only one?

Two of the sales assistants noticed me and came over to help right away. These girls were amazing. AMAZING! I explained what garland I needed and they got it for me immediately.  Then I started to bitch to them about how the scent of the pine cones was ruining my entire Christmas season.

This is the garland that I have wrapped on my bannisters–see the little pinecones? The don’t smell!

Yes. I am offended by the scent of those pinecones. That fake cinnamon and spice gives me a headache so bad that it reaches to my neck and shoulders.   AM I THE ONLY PERSON WHO IS OFFENDED BY THOSE SCENTED PINECONES??  Apparently not, because one of the delightful sales assistants told me that she had to unpack three boxes of them and had an incredibly headache afterwards.

I’ve written letters to every store’s company who sells those things. The only store to do anything about it is Wegman’s. They now have these disgusting items OUTSIDE the store rather than inside!

The best was when I went to check out, the cashier noticed the pinecones on my garland and actually said “Oh…you know we sell scented pinecones if you are interested.”

I won’t repeat what I said back to her—but she was incredibly upset with me.  I may have made her cry a bit. Her bottom lip actually quivered as she meekly whispered to me “I love that scent.”

Next stop….Ikea. But this is getting long-winded so I’ll stop for now and start on Part Two!!! Stayed tuned…..

And in honor of that smell….Lynrd Skynyrd. That Smell!

20 Responses to Back to Blog. And Catching Up! Part One.