I’m A Bit On The Kinky Side Today!

Get your mind outta the gutter—ok?  I’m Kinky because of my never-ending love for The Kinks.  I have also had a 52 -year crush on Ray Davies, the King of Kink!

He was my first-ever crush.  The first time I saw a photo of him all I could think of was “You Really Got Me”!

That beautiful head of hair…

OMG! Now wonder I love this wig. It’s like the hair Ray Davies used to have. I’ll rename my wig to Raymonda!

I got to see them in concert many times—through their very unruly behavior on stage and naughty antics until Ray Davies went on tour solo a few years ago.

This morning as I got into my car to enter the battlefield known as 422, and to curse out the idiot drivers — because we all know that I am the best driver in the world, I perused through my CD collection and decided to revisit The Kink’s “Muswell Hillbilllies” CD. In vinyl, I played this on my turntable in my room countless times.  I was 16 years old when the album was released. 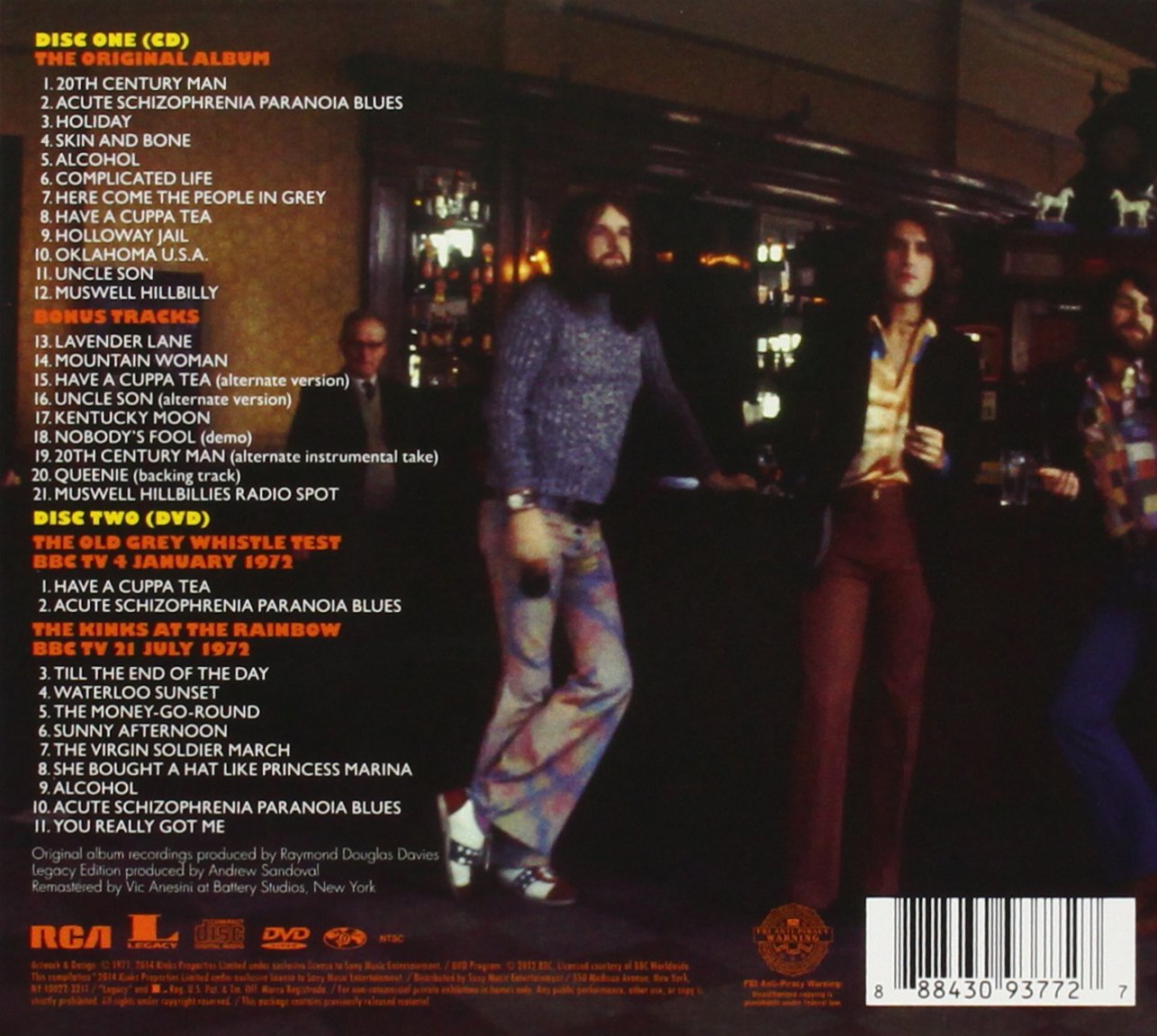 I had the original album. I need to head to Amazon to order this deluxe edition with bonus tracks!

As a 16-year-old, I thought the songs were cool. I never gave the lyrics to the songs much thought—even though I had them memorized.  It was the tunes, the beats, Ray Davies singing and my love for the band that was more important.

In the meantime, I’ll take this…

And so, as I was caught between the damned trucks and moving at a snail’s pace on the horrific road to work, I had the chance to really, really, listen to the lyrics of the songs.

I was blown away at how the songs mirrored my own life as well as modern life. Really. They did!  I’ll explain

Those lyrics—what do they remind you of, huh?  I’m not going to get political, but. Look what’s going on in the world. OK?

Acute Schizophrenia Paranoia Blues: …”Well the milkman’s a spy, and the grocer keeps on following me, And the woman next door’s an undercover for the K.G.B.”

Miss Microwave herself.  She’s the epitome of this song!

Kelly Ann Conway and the microwave?  Need I say any more?  I know what she’s got!

Holiday: …”Oh holiday, oh what a lovely day today, I think I’ll get down on my little knees and pray, thank you Lord. Thank heaven for this holiday, holiday. I’m leaving insecurity behind me.
The environmental pressures got me down. I don’t need no sedatives to pull me round” …

The Pool in Theoule is MY sedative!

Holiday is basically about me when I’m on summer vacation on the Cote d’Azur.  I do thank God, I pinch myself for being so lucky and I don’t need no happy pills!!

Rest assured, I’m up a good 5 pounds since this pic last month. I need to get back on track! Glad I listened to this song today!

Stay away from carbohydrates. Gonna look like skin and bones”.

I do. But I don’t look like skin and bone!  But Ray Davies has a great and fun outlook on what happens to young ladies if they try to lose too much weight!

I can recall. I was married to an alcoholic. But, the thing about this song is that it’s so good that any bitterness I could have flies out the window as a merrily sing along with Ray!

A hypochondriac’s anthem.  Seriously.  I wake up like this every morning.  I do believe Sir Raymond Davies knows me well!

Here Come The People in Gray: …”I got a letter this morning with serious news that’s gone and ruined my day. The borough surveyor’s used compulsory purchase to acquire my domain,
They’re gonna pull up the floors, they’re gonna knock down the walls, they’re gonna dig up the drains.”

I can’t help it. This song reminds me of the evil developers that ruined the island of Manhattan for the middle class and we all had to leave. The construction men in their gray uniforms demolished buildings to make monstrous buildings like Trump Tower—another reason I hate that man.

On the other hand, I get a bit bittersweet when I listen to the tone of Davies’ voice when he sings this song. His voice reminds me so much of Marc Bolan of T-Rex. Marc was another one of my all-time Rock favorites. I miss his music.

Marc Bolan–another rock musician I loved.  I’m telling you, that slight vibrato of Davies in this song really reminds me of Marc Bolan.  I need to listen to “Ride A White Swan” again. And again.

Have a Cuppa Tea: …” If you feel a bit under the weather, if you feel a little bit peeved, Take granny’s stand-by potion” …

Margaret Crowley Wynne–the greatest grandma on earth and the greatest brewer of the best cuppa tea ever!

I listen to this song and am brought back to the kettle that was constantly on my grandmother’s stove. We drank tea in the morning, afternoon and evening.  I love tea. I miss my grandmother’s tea.  Tea is comforting.

So, I can’t really relate to this song on an actual level—but there were times when I did feel imprisoned! I still love the song!

Oklahoma USA: …”All life we work but work is bore, If life’s for livin’ what’s livin’ for,”

This is relatable in the now. Work hours have gotten longer. Corporations want staff to be at the ready on their cell phones during the weekend.  People are afraid to take vacations—so what’s living for?

Corny photo–perhaps. But when you listen to this song, you will be moved.

But there is a very sad sweetness to this song. It’s about a woman who lives in a decaying home and dreams of the life of the film “Oklahoma” with Shirley Jones and Gordon McRae.

Uncle Son:” Liberals dream of equal rights, Conservatives live in a world gone by, Socialists preach of a promised land, but old uncle son, was an ordinary man.

Keep crying Ben Franklin. You and every founding father of our country are rolling over in their graves at how horrific the political parties in America have become!

How prolific are these lyrics?  How incredibly ironic that these lyrics were written in 1971 and are relative to today?

Muswell Hillbilly: …” They’ll try and make me study elocution. Because they say my accent isn’t right.

My favorite line from this song about people trying to change you.  And yes, I’ve spent a lifetime with people commenting on my—um, rather unique “New Yawk” accent.

And these are just some of the reasons that I love this little collection of songs so much. I love the lyrics that Davies writes. He has this gift of bringing words together that are touching and funny at the same time—and even for the most depressing of situations, he still brings the brightness in.

I love that.  And I love Sir Raymond!  (Shhhh..Don’t tell Bonaparte!)

Do you still listen to the music you grew up on? Does it bring a new meaning to you now in your life?

Go. And listen to music.  And enjoy it. And sing along. And find new meaning!  And get Kinky!

Because I love the pulsing beat and the slight vibrato that reminds me of Marc Bolan I have to play “Here Come The People In Grey”—enjoy!

Far from perfect, but enjoying life as a non-perfect and flawed individual at 60 years young. I'm still wondering what I'll be when I grow up! The characters in my life's screenplay include my better half. He is a refined Frenchman who grew up in Paris and summered in St. Tropez. I grew up in Long Island and summered in Long Island. I am not refined. My three grown children are also a big part of my life. For their sake, they happily live where their careers have taken them! But I can still mother them from a distance! I write about the mundane. I write about deeply shallow issues. But whatever I write or muse about--it'll always be a bit on the humorous and positive side! It's all good!
View all posts by Catherine →
This entry was posted in Uncategorized and tagged Ray Davies, The Kinks. Bookmark the permalink.

16 Responses to I’m A Bit On The Kinky Side Today!