Random Thoughts For A Snowy Day–And the Mistakes We Make!

First of all, I’m incredibly shocked at the major snowfall we are having on this second day of Spring 2018.  My office closed for the day and I was pretty-much upset—not about the snow, but about the office being closed.  I know that upon returning the work load will be doubled.

Three in the afternoon and it’s been snowing since after midnight!

And there lies my issue.  Rather than fester about the increasing workload that’ll face me, I should just concentrate on this Wednesday at home.  But the thing is, in the month I’ve been working, I really really enjoy my job.  I love the entire process of commuting, arriving and burying myself into the daily tasks.  It gives me a purpose. 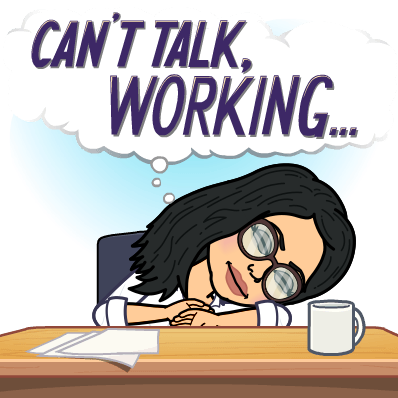 This will be me tomorrow. But I don’t really mind because I’m so lucky to be working again!

And, while my dear work-a-holic husband was out with clients, it gave me the chance to do something nice for him and shovel the driveway!

My snow day handiwork!  I haven’t had this much fun in the snow since the kids were at home!

Speaking of which. I wanted to post a what-I-wore last week but my iPhone camera got messed up with the IOS updates.  Sometimes technology is not the best of our friends! My photos disappeared!

All that was kept was this photo from Saturday, St. Patrick’s Day. I wore my dad’s sweater and I swear he saved the photo for me!

Back to the snow.  Bonaparte was really ticked off that it snowed because he’s one who can’t stand winter. At all. He loves the heat. He thrives upon humidity.  The hotter and muggier, the better.

Summertime is a great time as far as I’m concerned, but I am not a fan of the humidity that goes along with the heat. Give me dry. Give me a nice breeze and as long as I can drive barefoot, I’m happy.

And I’m not annoyed with the snow either.  The seasons have been in transition for quite some time now.  Remember when we actually had four seasons?  Remember when September arrived and within a week, the air became brisk and cool?  Now September can be, and is often hotter than August, and Fall doesn’t really begin until late October.  Same with Spring.  It seemed that years ago, Spring was in full swing by mid-April.  Flowers began to bloom, trees were covered with that lovely Crayola “spring green” color.  These days we are left with a rainy Spring that begins to warm up a couple of weeks before summer arrives.

OMG!  I was looking for images of Spring Green by Crayola because it truly IS the greatest spring color off all time and I found it ON OUR OWN FRIEND “DOODLE T’S” BLOG!!!   Click and read what she wrote!!! Crayola’s Spring Green

So today, I’m kicking back and am just enjoying the weather for what it is. A day to be with Chippy and you and waiting for Bonaparte’s retreat home!

Something else happened today that I found to be quite confusing.  One of my favorite blogs arrived in my email this morning and I was very excited to read it.  I’m not gonna mention the blog because something in the context disturbed and confused me. And I hope—no—I know it was a mistake because it couldn’t have been written in the way it appeared.  Body Shaming.  Photos of complete strangers and verbiage about their lack of healthy body shapes.  It really upset me to read this.  Especially since it is one of my favorite blogs and the blogger is a fun and kind woman.

In scrolling through the comments, I only read one or two that called her out on this. I was the third. Someone commented that those who called out had no sense of humor.  That’s a lame excuse.  Humor is humor and my humor usually falls at MY expense and not the expense of others.  I’m my best subject to poke fun at!

You know, everyone makes mistakes. I am sure I’ve made mistakes in my blog—I’m not talking about mistakes in printing or grammar.  I’m talking about mistakes that may hurt people.  If you see that I’m being unkind in any of my posts, honest to god, please call me out on it.  Sometimes we just don’t realize that we have the power to hurt with words and photos—we’re so occupied with what we are writing and our tone may not seem mean but at times, we need it to be brought to our attention. 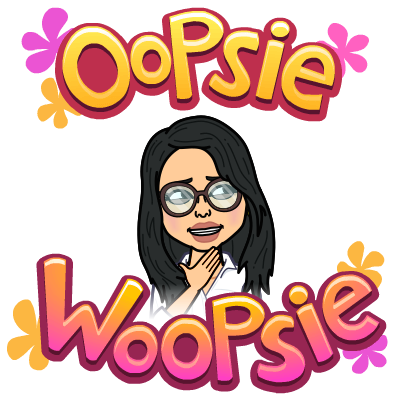 Please point out my Oops moments!  But I do have many of them!

So please—make me aware of my errors.

Speaking of which, everyone makes mistakes but it’s how we handle other’s errors   can also be a mistake.  We were watching Bill Maher’s Real Time last night (Thank God for “On Demand”) Billy Bush was a guest.  And after that infamous “Bus Video” with the one who’s in the White House now, Bush was the clear loser.  He lost a great job and was exiled like Napoleon was to Elba. Meanwhile, the narcissistic filth who uttered the demeaning words toward women sits in the White House with a bunch of cowards who enable him.

Bill Maher with Billy Bush, who lost his job due to Trump’s words.  I’m a huge fan of Maher’s because he goes after both parties.  I don’t agree with his views on religion otherwise, I’m pretty-much in agreement with mostly all his opinions!  And Bush should not be ostracized.  It’s the other one who said the words.  And if I was making the kind of oney that Billy Bush was making at the time, I would have kept my mouth shut too!

Bush admitted to a mistake he made by not standing up to the pig over 13 years ago.  Maher understood this and that’s why he had Bush on the show.

The self-righteous panel Pete Dominick, Nayyera Haq & Andrew Ross Sorkin, was quite rough on Bush. And I thought that was so wrong.  You want to go after the real culprit?  Go after the draft-dodging coward. This Bush admitted to an error.

…and Andrew Ross Sorkin, NY Times financial columist, all came at Bush as though he was a criminal.  Dominick and Hag came across as absolutely self-righteous and condescending to no end.  Sorkin wasn’t as bad.  But seriously–these three never made a mistake??  Give me an effing break!

Whatever happened to forgiving someone for a dumb mistake.  People these days are so high and mighty that they can’t let someone else’s non-damaging mistakes go.

Same with my gorgeous beauty-guru Tati Westbrook.  Westbrook, one of YouTube’s most successful beauty reviewers (and my favorite) created her own brand.   Most everyone (including me) thought her brand would be makeup.  Rather, she created a vitamin supplement, much to the dismay of many of her followers.  The backlash this poor girl received was absolutely uncalled for.

I swear I can’t buy a stinking cosmetic without thinking about if Tati reviewed it!  But those supplements of hers—-I wanna know who talked my girl into that one.  I do believe it may have been a business mistake and if so, who cares. Tati rocks the reviews!

Sure—I would have loved if she created a makeup line, but it’s her business and nobody else’s! She could have possibly made a mistake on the supplements and if she did, it’s no big deal. But from the video’s that were made in retaliation against her supplements were just mean an unkind.

We all make mistakes. We all make errors. And whether or not we realize it, most of us don’t mean to make them.  We learn from them (hopefully) and move on.

Will I continue to read that favorite blog of mine, even though a bit of a mistake was written?  Sure will!  She’s entertaining and fun.

Will I continue to watch my little Tati even though I won’t be purchasing her supplements?  Sure will!  She gives the best reviews ever!

What do I think of Billy Bush?  Hey. I hope he finds another job. Brian Williams was re-hired by MSNBC after lying about a news story?  The one in the White House has done more criminal acts than half of those in jail so Billy Bush should get redemption.

The ironic thing is that lyin’ Brian who reports serious news ended up getting rehired–and on MSNBC while Billy Bush, who reported celebrity fluff got fired and NOT rehired and all he did was NOT speak up to the filth known as Trump. It is all so disturbing! Williams was obviously forgiven for his mistake and Bush wasn’t.

Am I angry with Mother Nature?  Hell no!  She made a huge mistake in making it snow to welcome Spring but perhaps it’s just her idea of a joke!

I didn’t make a mistake to shovel the driveway, but I made a mistake by not bundling up enough. My nose has been running nonstop like a tap for the past hour and a half!

My mistake today is being home with this tempting Easter candy. It’s worse than the forty days Jesus spent in the desert!  He should have been here with a bag of Kit Kats instead!

This WAS displayed in this beautiful bowl in the living room. Bonaparte moved it to the kitchen so Chippy wouldn’t be tempted.  Instead I’M tempted.  Life is so not fair at times!

Enjoy the snow if you are a part of this wintry spring weather.  Enjoy the sun if you are experiencing great weather. Either way, have a great day!

Here’s some music for a snowy day.  Amadeus’ Soundtrack by Wolfgang Amadeus Mozart. I saw the movie Sunday on the big screen and although I saw it over a dozen times on TV with my DVD, I never saw it in the movies. It was bigger and better and I loved it so much!

Far from perfect, but enjoying life as a non-perfect and flawed individual at 60 years young. I'm still wondering what I'll be when I grow up! The characters in my life's screenplay include my better half. He is a refined Frenchman who grew up in Paris and summered in St. Tropez. I grew up in Long Island and summered in Long Island. I am not refined. My three grown children are also a big part of my life. For their sake, they happily live where their careers have taken them! But I can still mother them from a distance! I write about the mundane. I write about deeply shallow issues. But whatever I write or muse about--it'll always be a bit on the humorous and positive side! It's all good!
View all posts by Catherine →
This entry was posted in Uncategorized and tagged be kind, Bill Maher, Body shaming, Snow day, Tati. Bookmark the permalink.

31 Responses to Random Thoughts For A Snowy Day–And the Mistakes We Make!