We left off going back to the hotel to get a well-needed sleep.  But before I continue I’m just going to move back a bit—OK?

We took a nice walk on the Seine on our way back to the hotel. We spotted a group of young people dining al fresco, I took a pic of Danièle’s building from across the river and we enjoyed our quiet stroll back.

Look to the right. See the arched windows–well, Daniele’s building is to the left. Peek-a-boo hoo!

In the meantime, I forgot to tell you—Bonaparte’s “cousin”, Jean-Denis Robert and his wife, Marie invited us to dinner at their apartment for Saturday night.  Then Bonaparte’s brother-in-law Michel (Bonaparte’s sister Isabel passed away) and his wife Marie-Claude invited us over to their home for dinner on Sunday night.  Hold on—I’m getting ahead of myself now. I’ll get back to the dinners later. But it was good for Bonaparte to keep busy and being invited to dinner was great.

Bonaparte’s cousin, Jean-Denis–and he happens to be standing in front of Atelier Andre Girard Gallerie–which I’ll be writing about in my next installment!!!

Back to the weekend…

So anyway, we woke up very late on Saturday morning. By the time we got ready it was almost noon. And it was too late for “petit déjeuner”—breakfast and, by Paris standards, too early for lunch.  I had an agenda that would keep Bonaparte busy for the day. We would walk around The Latin Quarter and St. Germain. Besides—I had errands to run.

Nya, ha, ha! We overslept but aren’t guilty about it. Sleep was surely needed!

The weather was brisk and cool—a perfect day for walking around.  It dawned on me that Autumn is the greatest season in Paris.  Summer, especially this past summer was unbearably hot.  The cold winter wind can make your eyes tear up so quickly and make your ears ache.  It rains so much in Spring. But Autumn—the lighting is different. The sky is overcast, but not in a depressing way. I think it may be due to the bright colors of the falling leaves that are a nice contrast against that gray sky. You know what I mean?

We walked over to Place Dauphine first. It looked so empty and barren compared to the liveliness of the  square in the summer.

An unoccupied bench on Place Dauphine. In the summer people practically have to fight to sit on this! Isn’t it pretty in it’s lonlieness though?

We took the stairway down to the parking garage that housed Danièle’s car.  Yeah. That’s right. I wanted to take a picture in front of the car. Actually, I wanted to break into the car just so that I could sniff that scent of L’Heure Bleu perfume and cigarettes but Bonaparte stopped me. I opted for a silly photo instead.

Can you just picture it?  “I’m sorry officer, but all I wanted was a sniff of L’Heure Bleue perfume and cigarettes”!

We walked over to Gilbert Jeune on Place Saint-Michel. Bonaparte’s granddaughter loves sticker activity books and I figured I would get a head start on some Christmas shopping!  I also needed another journal! 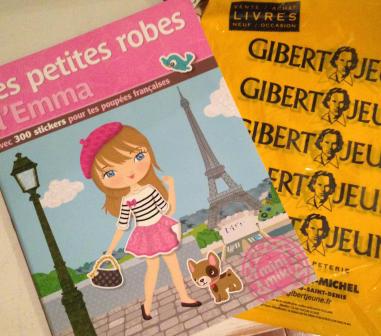 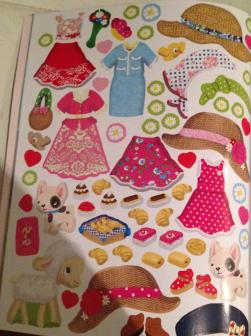 Look at those stickers–aren’t they the cutest? Look at the little pastries and croissants. Oh–I want to eat them! I swear I should have purchased a sticker book for me!

Next stop was a used CD shop that I love rummaging through to add to my collection of French music.   I was lucky to find a few CD’s and to finally snag a Daniel Balavoine CD.

Bonaparte was a bit thirsty—or, rather, I think he just wanted to sit for a while so we stopped at a café, Le Depart, and warmed ourselves up with “chocolat chaud”.  The French sure know how to make a killer cup of hot chocolate—it was heavenly.   The Autumn weather was still just slightly warm enough to sit outside, watch the passersby and to eavesdrop on those on either side of us.  To the left we couldn’t help but hear the incredibly loud British expats discussing their childhood spent of nannies, horses and balls.  To the right of us sat a group of Frenchmen—but they weren’t Parisian. They looked like laborers from the north that were enjoying the sights of Paris for the weekend. And they laughed, and smoked, and took photos of each other and smoked some more! 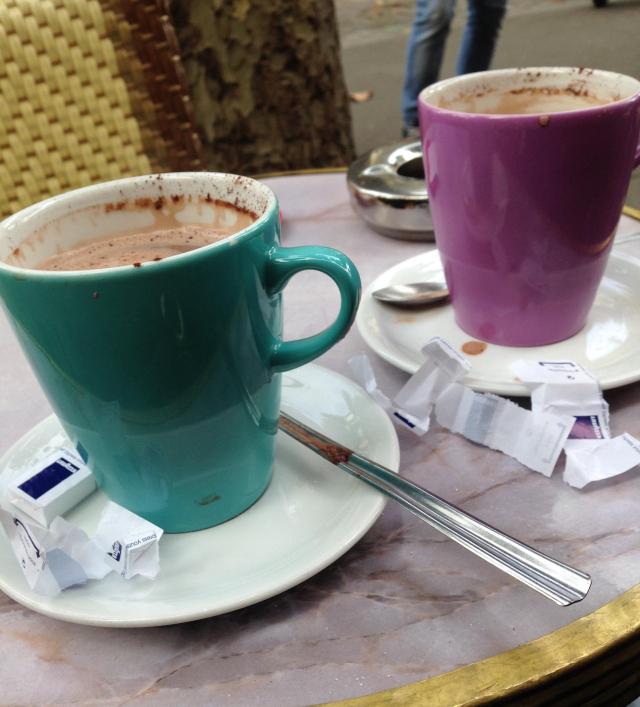 Mmmmmm. Chocolat Chaud. It’s so intense and chocolatey and warms your body!

In front of us was an accordionist. He was a portly man with dark hair and features and he among his playlist was seemingly the best of Edith Piaf.   He paced the length of the café hoping that any one person would offer him a Euro or two in exchange for sharing his musical talent.

Our accordianist set the tone for people watching from Le Depart!

His music did add a soundtrack to the activity on the street.  A young boy on his scooter, bumping into his mother. The mother becoming annoyed and agitated, yelling at her son. The son arguing back until……the mother’s hand suddenly gave a whack across the boy’s bottom. The arguing stopped and Bonaparte and I had a good chuckle about how if that scene played out in the States, a stranger would have called the police!  An older couple slowly walking their small dog who seemed to be moving much faster than them.  A young man, in jeans and a perfectly fitted blazer with his scarf thrown around his neck, passed by at a brisk speed speaking into his cell phone.  A young woman dressed in the highest of heels and not losing balance as she darted up the street.

The next errand was to my Parisian Nirvana. Citypharma. The mother of all mothers of all-things-beauty related. And the prices are dirt cheap.  You simply cannot miss Citypharma. It’s on the corner of Rue du Four and Rue Bonaparte. But the real landmark of this remarkable store is the crowd of men standing outside on the street waiting for their women’s exit.  Bonaparte was one of those men-in-waiting.  Since I’m familiar with Citypharma, I was able to grab what I needed quickly, but I still took my time on the way to the cashier. You just never know what other bargains you will find!

Forget Chanel, THIS is MY bag of choice!

The shelves are crammed with great and discounted beauty and body products. Love!

Some of my treasures from CityPharma. The best prices for Le Petit Marseillais products too..and the Nuxe huile retails for the USD equivalent of  12.50. The same size bottle retails for $29.00 here! Just sayin’!!!

Our walk wasn’t finished yet! 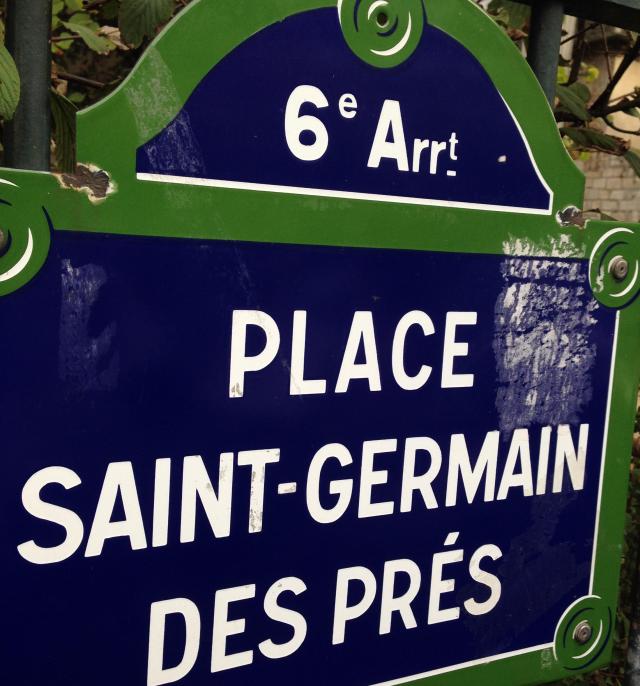 We headed over to Eglise St. Germain-des-Prés for a few moments of quiet reflection.  The church is just so ancient and in need of so many repairs and restoration and Bonaparte made a donation.  Besides—with the activity of the funeral yesterday, it was nice to see the church back to normal with the scattering of both tourists and faithful.

Exterior of Eglise St. Germain-des-Pres.  Is this woman waiting for God-ot?

We took the long way back to the hotel at a leisurely pace and feet away from the hotel, we heard someone call Bonaparte’s name. It was Bonaparte’s half-brother, Francois.

OK—I can’t stand the term “half”—so it was Bonaparte’s brother, Francois and his wife Beatrice.  They live at the edge of Paris but were enjoying the 6th on this nice day.   It’s funny because when you think of it, Paris may be a city, but it really is like a small town.  We’ve run into other relatives of Bonaparte while roaming the streets and today—this was a nice surprise.  The four of us decided to grab a drink and spend some time together during these late afternoon hours.

We walked up the street to La Palette, a very busy Bistro on Rue du Seine in St. Germain. 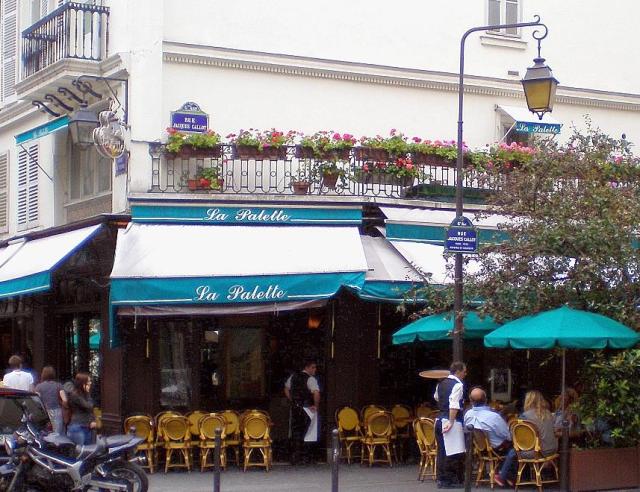 If you want to celebrity watch, THIS is the place to do it! Oh…I wish I had taken photos!

Bonaparte and Francois talked family and we talked about travels throughout France and we had a great time. I almost died though because guess who was sitting at the table across from us?  Eric Clapton—and I didn’t want to be rude so I missed an epic photo moment. Eric. Effing. Clapton! Add to that, moments later, the actor Gilles Lellouche, plops himself at a table to my right.   I was on celebrity cloud neuf!  We finally made it back to the hotel for a bit of a rest and to regroup before heading out to dinner.

Gilles Lellouche–OMG. He is such a great actor and he was sitting right near me.

In all the years we’ve been visiting Paris as a couple, Danièle has always hosted dinners. Jean-Denis, Yves son and  Danièle’s stepson and Marie, his wife have been frequent dinner guests and we’ve always had a wonderful time with each other.   It was an absolute pleasure to be invited to their home for dinner. Their apartment is iconic Parisian. Mouldings on the walls and ceilings, old chevron-patterned hardwood floors, a marble fireplace in the salon, ceiling to floor windows, beautifully draped and loads of character and charm made me covet their home.

Mixed in with some old school furnishings are touches of funky art. The apartment is an eclectic and joyful mix and is a complete reflection of Jean-Denis and Marie’s personalities. After consuming a ton of fantastic food and a ton of good wine and quite possibly the best grape tarte I’ve ever had in my life, we were ready to call it a night.

Jean-Denis, a photographer, gifted us with a little book of his photographs that he made when he attended “La Bravade” this summer.  It’s a celebration honoring St. Torpès, the Patron Saint of St. Tropez. La Bravade is also a military celebration where everyone is dressed in uniform and native French costume.   Note to self: Work on Bonaparte—maybe we can visit St. Tropez next year during this festival! 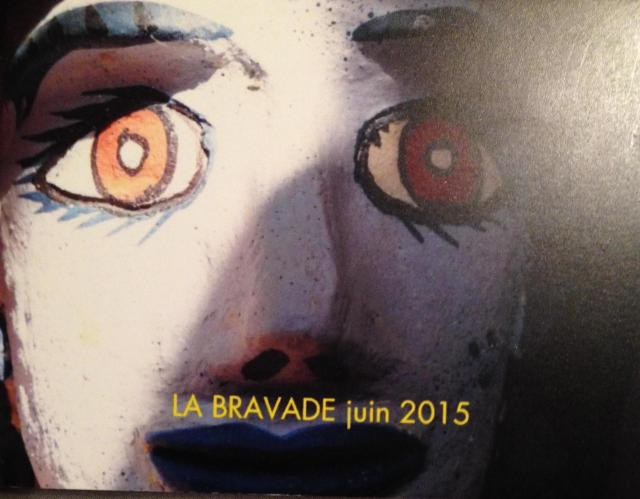 We missed this festival by two weeks. Arrrgh!! It would have been a blast to be there–especially with Bonaparte’s family!

A late night into an early morning but back to a late night because the clocks were pushed back an hour—the French are a week ahead of us on this one.

We were reminded to turn our clocks back by this sign in the elevator. Bonne Nuit!

Uh oh!  Don’t be mad at me but I have to continue this weekend in Paris to another part!  Sunday’s adventures will be continued………………….

In the meantime, here’s a song by an ex-tennis player turned musician. Yannick Noah—”Ye Mama Ye” I love this catchy song—it’s easy and funky! Enjoy XOXOXO!

Far from perfect, but enjoying life as a non-perfect and flawed individual at 60 years young. I'm still wondering what I'll be when I grow up! The characters in my life's screenplay include my better half. He is a refined Frenchman who grew up in Paris and summered in St. Tropez. I grew up in Long Island and summered in Long Island. I am not refined. My three grown children are also a big part of my life. For their sake, they happily live where their careers have taken them! But I can still mother them from a distance! I write about the mundane. I write about deeply shallow issues. But whatever I write or muse about--it'll always be a bit on the humorous and positive side! It's all good!
View all posts by Catherine →
This entry was posted in Daniele Delorme, Jean Denis Robert. Dany Lartigue. St. Tropez. CityPharma, La Palette. St. Germain de Pres and tagged France, Fun in Paris. Autumn in Paris, Loss., Weekend in Paris. Bookmark the permalink.