My loving husband came home from work a little while ago.  He wasn’t in the best of moods because he made a remark about the state of our stove—and I cleaned it.  His adoring tone seemed to be questioning if I did anything all day. 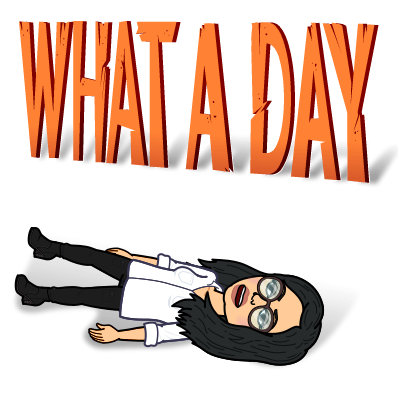 No. I did nothing except to lay around —what do you think I did?

So I’m gonna tell you what I did—because I don’t want to act the way I did when I was angry at my computer—remember that???

Now–tomorrow I pick Roman up at the train station.  He’s visiting for a few days and I’m giving him the King’s treatment.  He was at the Super Bowl.  Jimmy Fallon had a special show after the “This Is Us” episode that aired after the Super Bowl.  Then he had to catch a Six AM flight back to New York.

My son had to work into the wee hours after Super Bowl–and he had a blast.  He was telling me it was so much fun!

He had a great time and was thrilled that The Eagles won.  And he’s been working non-stop.  So, I’m making everything nice for him!

Saturday night, my step-daughter, her husband and their daughter will be coming over for dinner so it’ll be a nice little family gathering.

That means there will be a lot of food at Chateau Bonaparte!

But first, here’s how the day rolled.

Got up at 6:30, enjoyed my morning cup of cawfee in bed like the princess I am.  Bonaparte makes the best coffee.  And while I enjoyed my morning drug, medication, caffeine fix, beverage, I made a list of what needed to be done.  Now—this was at 6:30 in the morning. 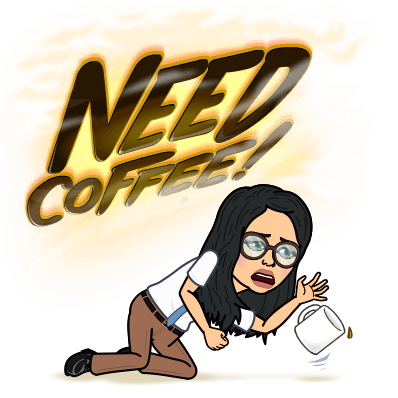 Funny how I’m not a coffee drinker at work or during the day but I NEED my morning cup to wake up!!!

At Seven O’clock, I was in the little guest room makeshift beauty room.  My makeup had to be looking good today because my passport needs to be renewed which means I have to have a new passport photo taken.  Naturally, while making myself presentable, I decided to swatch some samples of my newest Morphe eyeshadow palette.  I’ll be doing a blog post on this sometime soon.  Not this weekend though.

Procrastination at its best.  I was supposed to be applying these shadows to my eyes but played beauty blogger instead and applied them to the inside of my arm!

I had to make a decision on what hair to wear.  I wish you could have “various” or “it depends” next to Hair Color: ______.  Because I wear wigs, I have a varied assortment of fake hair color.  I decided to go with my Justine wig from “It’s A Wig” because this particular wig has strands of just about every hair color I own.  I even pulled a little of my *cough* “natural” black hair out in the front!

Why couldn’t THIS be my passport photo?  Seriously.  Wait till you see how the photos turned out.  Ugh. Leeeeeeeee!!!!

Next—the saga of the Boots from Hell continues.  BTW, thank you to everyone who suggested I get in touch with the Tory Burch company.  I sent them a nice email explaining what happened.  Gerardo, from Customer Service called me!  Can you believe it??  I was shocked.  Thank God I didn’t throw the boots in the trash. Instead, I threw them in the closet in the hallway downstairs.

The boots from hell are finally on their way back to their maker!!

Gerardo sent me an email with a label to send the boots back to Tory Burch in exchange for a gift card.  Works for me!  And—just my luck, my stinking laptop has no printer. I had to email the information to Bonaparte, he couldn’t print the label but printed a receipt. I had a scan to show the people at UPS so that was good enough. BTW, Gerardo is an exceptional customer service rep.  I’m writing a letter to let TB Corporate know how good he is!

Off I went. My wig in place and not shifting. My lipstick looks good. My boots from hell are in the box.  Chippy has been taken out and I stuffed a Kong with a ton of treats and peanut butter for him.

I got to the Rite-Aid to have my photo taken.  The woman was very nice in an authoritative kind of way.  She told me to take my glasses off.  I balked.  I explained to her that my glasses are my personality. Just like Alfalfa from the Little Rascal’s cowlick is his personality. 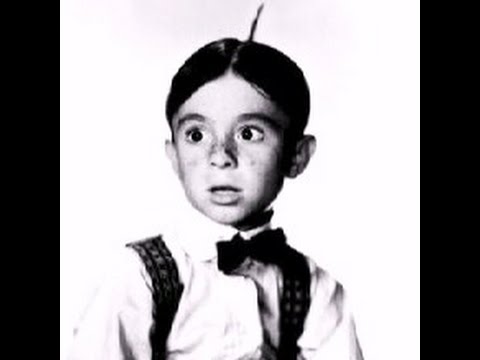 I took them off.

She had me stand in front of a white screen and trying to look my best, even though I couldn’t see a thing, I smiled.

It was a true mug shot—but nonetheless, I didn’t care.  I was thinking of the letter I was going to write to the head of the passport department explaining that I should be able to use a selfie as my passport photo because I know my good angles.

I have to laugh at this photo.  I’m so cross-eyed that it’s quite sad.  Then there’s the jowls.  Please God. Please let me win the lottery so I can go to Hospital for Special Surgery to have my face lifted.  I’m special!

Next stop was Costco.  Bonaparte gave me very specific instructions that I was to buy the best beef tenderloin they sold. Not the $18.99 a pound one but the $22.99 a pound filet.  I was also instructed to get coffee.

I think this will be enough meat for five adults and one child.  I’ll take mine blue!

Now—I thought it very odd and eerie that there was no traffic this morning. It was as though I was driving through a ghost town.  Then I realized that today was the parade in Philly for The Eagles.  This lack of traffic has given me a new appreciation for Eagles fans.  They were all either lined up in Center City waiting for the parade to start or they were home getting ready to watch the parade on TV.

It was the very first time I’ve ever gotten parking space twenty feet from Costco’s entrance.  And when I made my purchases, I didn’t even have to wait on a line!

Next stop was Wegmans to load up on weekend food!   Again, I had to stop and give thanks to The Eagles.  The parking lot was empty and I buzzed through that supermarket in less than an hour. And I got a lot of food!

And more meat!!  This for the Gyros!!

For tomorrow night, Roman has requested my Broccoli Rabe, Sausage and pasta.  When I arrived home, I cooked up the broccoli Rabe and the sausage, put it in a plastic container so that tomorrow evening all I have to do is cook the pasta, reheat the Rabe and sausage, mix and serve!

Chopped up the Broccoli Rabe, par boiled it and…

…took the sausage out of the casing, and cooked it with the veg.  It’s now in the fridge.  I’m making my dinner time-friendly tomorrow!

While the sausage/rabe was cooking, I made mushrooms in Cognac for Saturday night!

I bought the makings for Salmon Rillettes but forgot the white wine and surprisingly there was none at home.  Tomorrow morning I’ll head out to get the wine.

I’ll make the Rillettes tomorrow.  Ewww. I just noticed that the salmon is color enhanced.  WTF????

Pound cake is in the freezer for Saturday evening’s dessert but I made an orange-caramel sauce to drizzle over the slices.

Not one to be satisfied with one dessert, I also made a Nougatine.  This is a no-cook, put in the freezer and wait to serve.  We’ll have that on Sunday.

Pistachio brittle for the Nougatine.  It was fun pounding this into small, dusty pieces!

And not wanting to waste any part of the egg, because the nougatine is made with egg whites,  I made lemon curd.

I am a sucker for lemon curd..

All ready for the fridge. It kills me because lemon curd is so overpriced in the stores. It’s the cheapest thing to make at home. Got yolks?  Make lemon curd!

Speaking of Sunday—Roman has also requested the Gyros that we had over Christmas.  I picked up the meat, cooked it and now it is in the fridge taking in the garlic and herbs that will make it more flavorful when we are ready to eat it.

The worst part of making the gyros is pulsing the onions. After the onions are pulsed you have to place them in a kitchen towel and wring out the juice.  I was crying for fifteen minutes after that!

Remember the Rosemary bush I bought before Christmas?  Well, it dried out because I neglected it.  But the needles came off so easy and I was able to bag them. Now I have freshly dried Rosemary and I pounded this for the gyro meat.

Gyro meat ready to be cooked…

Sliced and into the fridge.  The flavors will all absorb and by Sunday–BAM!!!  This will be delicious!

I also made Tzatziki for Sunday.

Best Tzatziki is the stuff you make at home!

Now I am left to make the Rillettes, bake the bread, bake the Pita, peel and cook the potatoes and thinking of what veg to make for Saturday evening.

And that was my day.  It is now 5:00 PM.  I’m thrilled because it isn’t dark yet.  In fact, it isn’t even twilight!  And I never got to watch the Eagles parading through Center City. 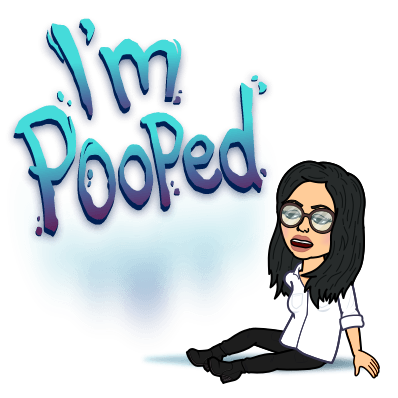 Yes. I did all that in one afternoon!  I’m pooped now!

And how was your day ladies and gents? Ever have one of those days where you’re doing a million things and then someone thinks you did nothing?  Fun times!

On the way home, I was listening to the radio and a song I absolutely used to love was played.  I started seat dancing and singing in my car.  Wild Cherry “Play That Funky Music”. The Seventies—such great funk music!  I miss funk!!

Far from perfect, but enjoying life as a non-perfect and flawed individual at 60 years young. I'm still wondering what I'll be when I grow up! The characters in my life's screenplay include my better half. He is a refined Frenchman who grew up in Paris and summered in St. Tropez. I grew up in Long Island and summered in Long Island. I am not refined. My three grown children are also a big part of my life. For their sake, they happily live where their careers have taken them! But I can still mother them from a distance! I write about the mundane. I write about deeply shallow issues. But whatever I write or muse about--it'll always be a bit on the humorous and positive side! It's all good!
View all posts by Catherine →
This entry was posted in Uncategorized and tagged cooking, Entertaining, Humor. Bookmark the permalink.