Paris in Four Days—Part Three. Mucha Do About Nothing but a Great Exhibit!

It’s Saturday already and tonight we will go to the apartment of my husband’s cousin, Jean-Denis and his wife Marie.  But we do have an interesting day planned.

As usual, it seems that whenever we are in France—there’s something going on.

I was here for the Taxi strike.  It was not pretty.

We were in France for the infamous Taxi strike a couple of years back, an Air France strike that had us teetering on the edge of having to rent a car to drive from Nice back to Paris. 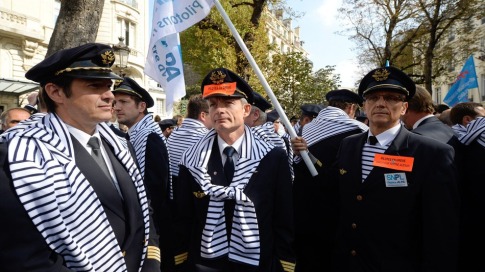 And yeah–I was in France during this Air France strike too.

This year, it was the Manifestation of the “Yellow Jackets” A large group of right-wingers who came into Paris from all over France to protest the rising tax on gasoline.  I’m not going to get into French politics here but it seems that the middle class is affected by rising costs throughout the world. It’s a global thing but this manifestation went too far.  Luckily, we weren’t affected.

And this year–I was in Paris for the Demonstration of the Yellow Jackets!  (Shhhh–don’t tell anyone but it’s more dangerous here in the States where you can be shot at any time by a crazed gun owner!)

However, the sad thing is that it did affect shoppers who traveled into Paris to do some Holiday shopping. I’ll leave it at that.

Anyway, we woke up at ten in the morning—which I almost freaked out from oversleeping.  But my husband assured me that I was being very American and that I should just go with the flow.  And by this time, he wasn’t even thinking in English.  He was speaking to me in French and thankfully, I can understand the language.

Oui, oui!  My husband forgets that English is my first language and speaks to me in French when we’re in Paris–it’s because he stopped thinking in English!  Oh Merde!

With news on TV of the manifestation, we had to think about our route to the cemetery to visit Danielle. I was willing to walk but a certain someone was a bit chilly and so we cabbed it to Montparnasse.  And, get this—the man who never forgets anything forgot to bring his money!  Luckily the cabs are well-equipped to take credit and debit cards.

Another rainy morning–I was willing to hoof it but we ended up in a cab!

Montparnasse Cemetery, for some odd reason, is a very relaxing place for me.  There’s something very soothing about being in the center of the souls from centuries and decades past.  Row upon row of crowded headstones and sculptures –it’s almost akin to an outdoor exhibition. 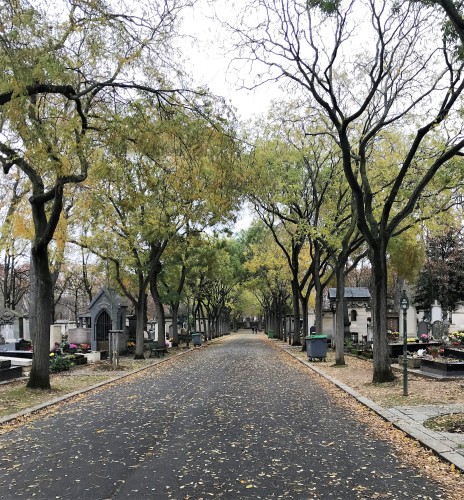 Perhaps it’s the time of year but I find this place to be a very comforting and soothing one.  The French cemetaries are much different than ours.

With signs like this, it’s easy to find your way around.. 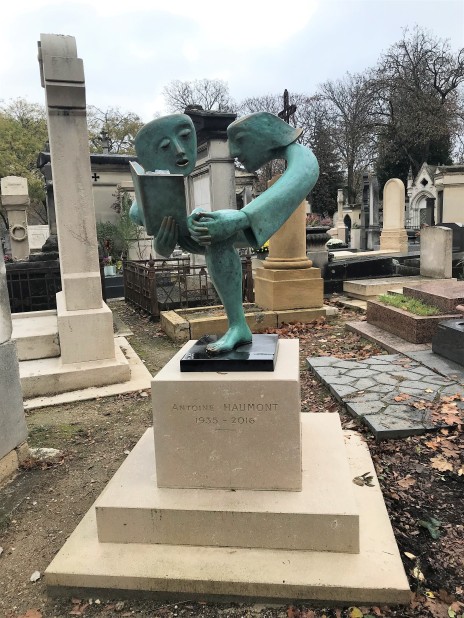 A spigot with water and a watering can for those who need to water the flowers.. 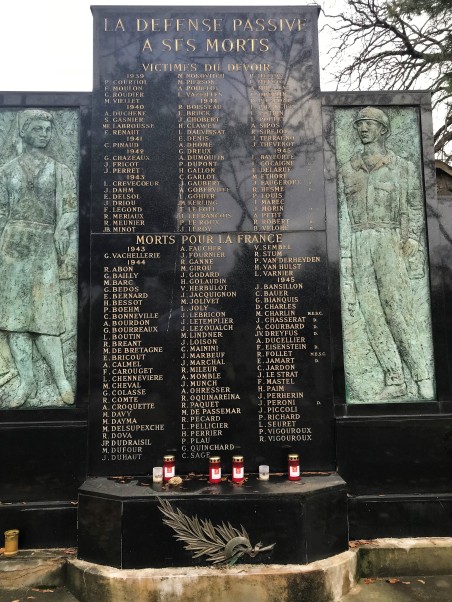 A war memorial.  Those little jars are candles.  I thought they were tomato sauce but Bonaparte explained what they really were.

But this time, as we entered through the iron gates, I felt tears running down my face and it wasn’t from the cold and rain.  It was because for that moment, I wished that Daniele hadn’t died.  I wanted her to still be around—perhaps I was being selfish but I really felt that emptiness and just wanted her to be next to me so we could go arm and arm to her cabinet, grab a botte of Porto and giggle and laugh.

I had a little conversation with her after I tidied up and kissed her goodbye.  I know she saw us.

I cleaned up some leaves that fell on her and her husband Yves’ grave and pulled a few weeds just to make things tidier.  Bonaparte was unusually quiet as he walked over to his cousin Zazi’s grave. 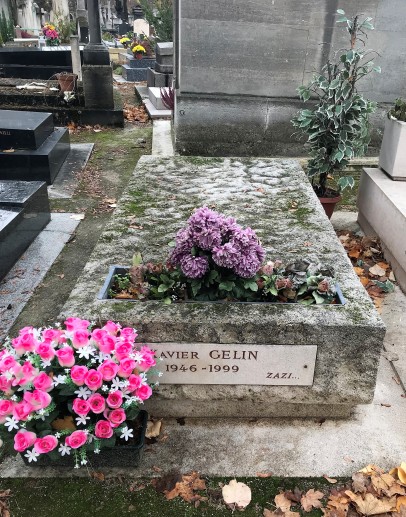 Bonaparte spent time with his cousin–in reality they were more like brothers.

And then we made our way out to take a glimpse to see what became of the art gallery that Daniele ran on the side.  It’s a mosaic shop now. 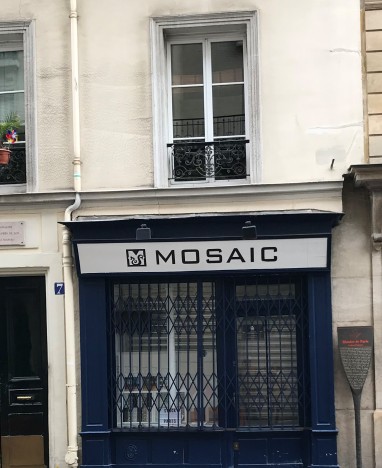 It’s hard to believe that this little Mosaic shop was an art gallery –if those wals could talk..

We walked up Blvd. Raspail — my husband was starting to come down with a cold so we stopped at a pharmacy and let me tell you something–those French pharmacists are like doctors.  It’s a hypochondriac’s dream.  If I lived in Paris every single pharmacist would know me personally! 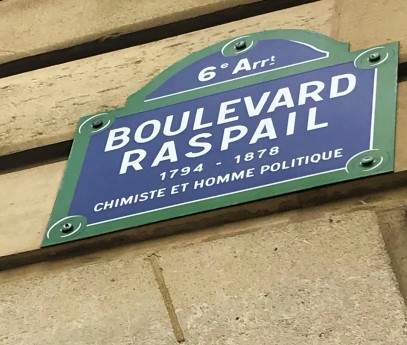 One of my favorite boulevards for wandering.. 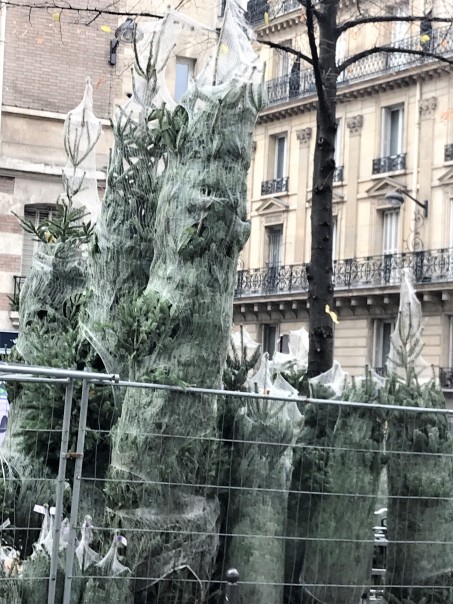 More Christmas trees—and these were huge! 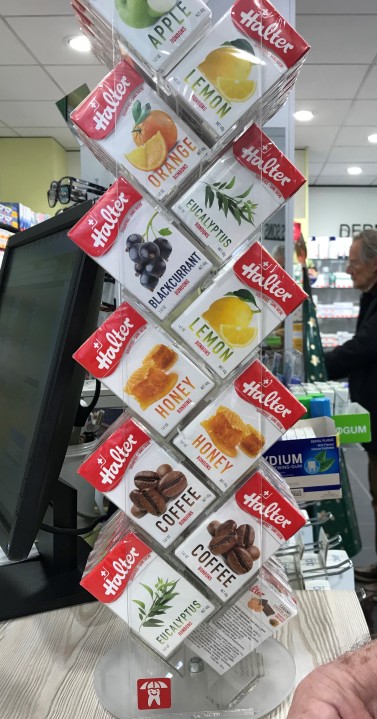 I was tempted to buy all of these at the pharmacy!

We found an ATM and took respite from the cold and damp by enjoying a nice hot cup of Café Crème.

Always a good idea for a cafe creme and a croissant!

Wandering around, Bonaparte had the idea to stop at Dalloyau across from the Jardin du Luxembourg. We’ve been going there regularly for years and a mid-afternoon pastry would hold us over till dinner.

I was so upset that Dalloyau closed I couldn’t steady my phone!

It was closed.  Things change so quickly.  I don’t know why that location was closed because the shop was always busy but I guess it’s the way things are now.

The police were placed all over the city because of the demonstration.  Those police may look like little nuggets of law but they are as tough as nails and in great shape! 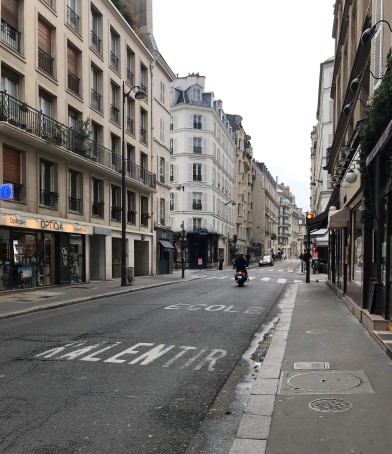 I swear to you, I’ve never seen the streets in Paris this empty–not even on Sunday morning!  That demonstration made it great for anyone who wanted to walk around the city streets!

All was not lost though, because we decided to catch the Alphonse Mucha exhibit at the Musee du Luxembourg.  The line wasn’t long when we arrived and the twenty-minute wait was well worth the treasures that were inside! 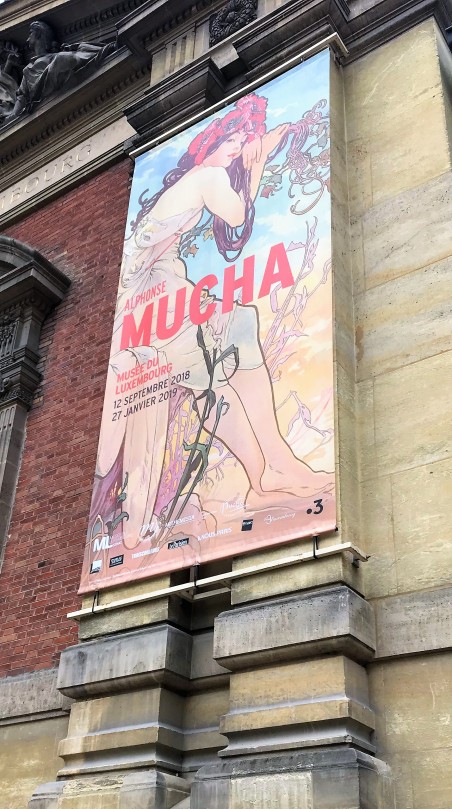 I was thrilled that we got to see the Mucha exhibition!!!

He was mucha talented! 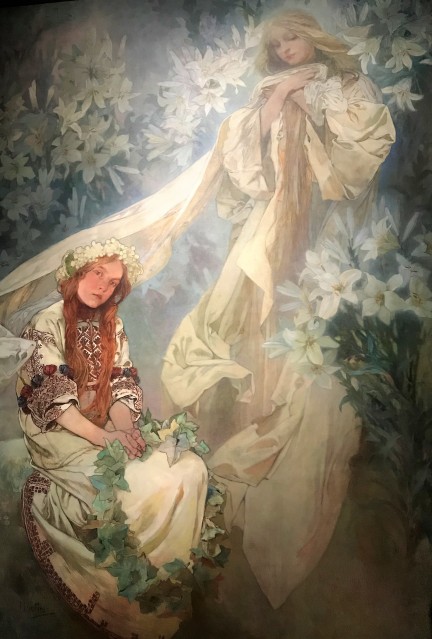 The way he showcased women was so gorgeous and ethereal.. 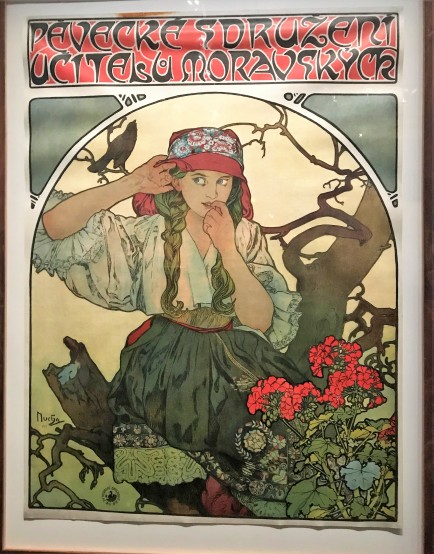 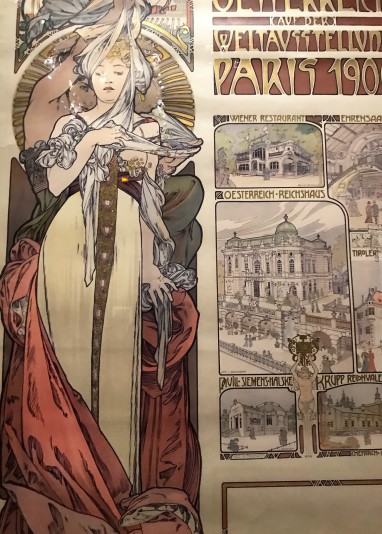 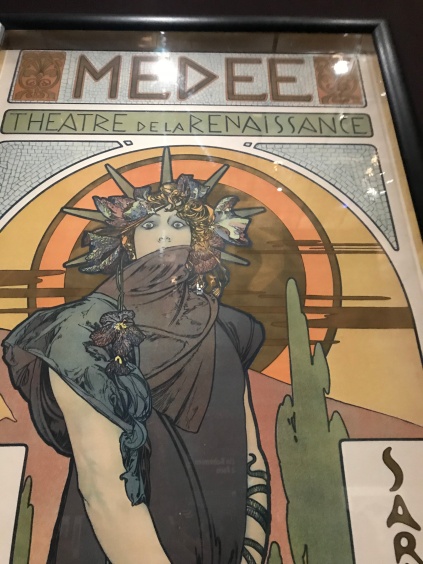 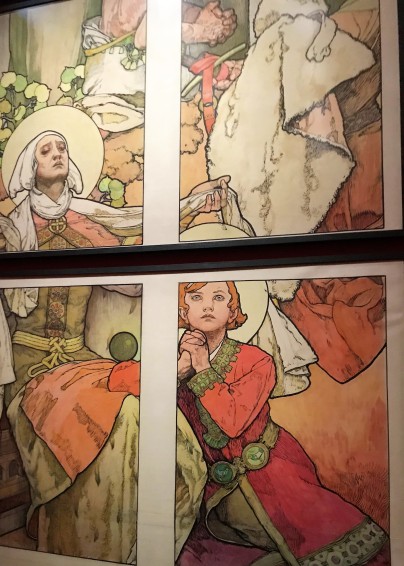 I saw this bust at an exhibition at Petit Palais a few years back and was happy to see it again!

I purchased a book with posters to be framed!

Art Nouveau may have been a fleeting movement in the art world, but I love everything about it.  Especially the illustrations and paintings and this exhibit was everything and more!  It didn’t surprise me that it was incredibly crowded either and by the time we left the small museum, the line was outside the museum, outside the gate and down the street!

More walking–back to the hotel.

But first–I must stop to look at Christmas Ornaments!

I would not mind a bag of the real stuff!

The mist turned into a light rain and we got our exercise by walking back to the hotel—just in time for a nice rest before heading out to dinner at Jean Denis and Marie’s.

Sorry I have no pictures of our dinner but I left my phone at the hotel.

Sunday had a more ambitious schedule ahead.  Stay tuned for Part Four!

Far from perfect, but enjoying life as a non-perfect and flawed individual at 60 years young. I'm still wondering what I'll be when I grow up! The characters in my life's screenplay include my better half. He is a refined Frenchman who grew up in Paris and summered in St. Tropez. I grew up in Long Island and summered in Long Island. I am not refined. My three grown children are also a big part of my life. For their sake, they happily live where their careers have taken them! But I can still mother them from a distance! I write about the mundane. I write about deeply shallow issues. But whatever I write or muse about--it'll always be a bit on the humorous and positive side! It's all good!
View all posts by Catherine →
This entry was posted in Uncategorized and tagged Christmas in Paris, Four days in Paris, Paris, Travel. Bookmark the permalink.

23 Responses to Paris in Four Days—Part Three. Mucha Do About Nothing but a Great Exhibit!