You May Now Call Me…Grandma!

Well, it’s been a whirlwind three weeks.  There’s been a lot going on in my life.  Let’s see……… my husband had surgery and he’s 100 percent fine.  I went through the annual stress and anxiety of getting my mammogram…and that was fine.  And work?  Well…it’s still there.

But the big news is that I became a grandma on Tuesday, January 26th!

I’ll tell you all the juicy details.

So, Oona went to the doctor the Friday before giving birth…January 22, to be exact.  Oona’s blood pressure was on the high side so they were monitoring it.  And on Monday, they decided to admit her to the hospital.  They were going natural, but the baby was a bit on the large side for her body type.  (Where this mommy has what is called “Irish” hips, the same cannot be said for my daughter).  And after pushing for over 2 hours, it was decided upon to give her a C-Section.

My baby and her baby!  He had no problem finding his thumb!

Straight outta the womb and into the world. He’s about five minutes old here.  She did deliver two weeks early. Had she gone full term, this little nugget would have weighed in over 9 pounds!

After the initial relief that the baby was well and kickin’ and healthy, my thoughts went back to my daughter.  To be honest, I was really concerned about her blood pressure.  I never had that issue during my three pregnancies and remained slightly worried about her. I’ll get back to this.

In the meantime, she and Sam produced the cutest (I know, I know..every grandparent thinks the same thing), most adorable baby I’ve ever seen. Owen is perfect!  And the photos they sent me didn’t do justice as to how precious that li’l nugget of handsome is.  I couldn’t wait to hold him.

All snuggled up! He’s just so stinkin’ cute!

Here’s where it gets weird. And I think I made a couple of errors in judgement. I’ll explain.

Naturally, I couldn’t wait to fly to Cincinnati to see my daughter and my grandson.  I had a week of rollover time off from 2020 that had to be taken by March or I would lose it.  And as much as I love and adore my boss, she kind of wanted to know when I would be out of the office. My ex-husband was asking me when I was going to visit so he could block out time for him.  Roman and Jake were also on the queue for traveling to see their nephew.  I ended up leaving for Cincinnati on Friday, February 5, and returning home on Valentine’s Day.  In hindsight, this wasn’t really the best choice I’ve ever made.

Why? You ask.  Well, it didn’t give Oona and Sam much “alone” time with their son.  Honestly, I didn’t think this through.  My impatient nature got the best of me.  I’ll tell ya something else.  For some ungodly and delusional reason, I thought Oona would be overwhelmed at the prospect of new motherhood.

Ummm.  Yeah.  No way is my daughter overwhelmed. She took to motherhood like a fish takes to water!

After all, thinking about how I felt when I came home with my son Jake, I was overwhelmed. I had nobody to help me.  My mother lived in Florida—although my dad came up for moral support, and I didn’t get along with my mother-in-law.  I really felt alone. Don’t get me wrong—I loved being with my baby and relished in everything that goes along with having a baby. It was just that first two weeks made me doubt if I had what it took to be a “mommy”.  And I thought Oona would feel the same way.  I expected her to be a bit needy and dependent upon me.

Oh boy, was I ever wrong!

This mommy has it under control!

She had that mommy thing down pat.  In fact, she was a hell of a lot better at it than I was when I came home.

She’s very organized.  I’m not.  I was a very “crunchy-granola” earthy attachment mom. (albeit with more of a preppy style—a true paradox).  She’s got Owen on a schedule. I had no schedule and very quickly my overwhelming emotions flowed into complete chill and relaxation. 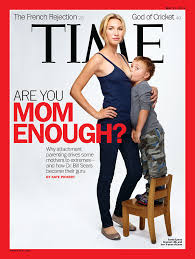 This was me –breastfeeding until the children were three years old.  I made their baby food too. And baked goods.  And home-made tortillas because I didn’t want them to be fed a ton of chemicals. All that changed once they became involved in extra-cirricular activities.  Kraft Mac and Cheese anyone?

In addition, realizing it’s been thirty-one years that I’ve had a baby in the house, there’s a lot of things that have changed.  When I breastfed, the only pump available was a Marshall-Kaneson that looked like a cross between a kazoo and trumpet.  The pumps my daughter is using are incredibly advanced in tittie technology!

This is a replica of the pump I used. And I managed to get quite a bit but this is so primitive to what’s available now!

And then there’s the lactation cookies.  I was told to drink a bottle of beer to produce milk. I hate beer but luckily, produced a ton of milk on my own.

And yes. I tasted a couple of these cookies. They were delicious but alas–I didn’t produce any milk. My well has run dry!

The trip was a good one though.  I was able to hold my little bundle of joy and even got to babysit while Oona and Sam went out to breakfast and ran errands. Due to the winter weather at it’s best, we had a very nice snowstorm and spent most of the time indoors.

In the dire need for exercise, I went outside for some photos and a long walk. It was actually very beautiful outside!

Oona and I binged on Workin’ Moms, a series on Netflix and watched a few documentaries.

I’m full of bliss. Dang I wish I could take him home!

I roasted a lemony chicken, grilled brussels sprouts and made sausage and peppers with tortellini in a pesto sauce. Oh..and I made cookies and brownies too!

And that was it.

Holding my grandson was an emotional experience. It was an odd feeling to see my daughter as a mom.  It was even more odd to see that she didn’t need me.  She’s got everything under control. It was sad that my baby advice was not needed because she gets her baby advice from her friends.  But I guess that’s the way it is.

It also comes as a rude awakening that I won’t be the grandma that is close to Owen.  I’ll be that grandma—the one who lives far away.  Everyone tells me that the time spent with him in the future won’t matter because it will be quality time.  But I ain’t buying it.  My grandmother was an important factor in my life and I saw her regularly.  I was with her every day when before we left the city for Long Island and I continued to spend my summers with her, my grandfather and Aunt Terry. These were the adults who had the most impact on me.  I was closer to my grandmother than my own mother.  And the fact that I won’t be seeing Owen on a regular basis is daunting.  I certainly won’t be a major player in his life but I can make our time together fun.

Sadly, I won’t be the close grandma. I have to come to terms with that.

Face time and Zoom aren’t the same as real life.

A future UT Longhorn. Uncle Jake got him a Bevo pacifier!

So yeah, if any of you out there are about to become first-time grandparents in a while, give the new parents time to settle into their lives as a family with their child.  Don’t be over-zealous or over-anxious to see the new baby. Don’t smother your children. Don’t give advice—just listen.  Don’t hover over the baby.  If you have to travel a long distance, give it a bit of time before visiting.  Don’t ask if there’s anything you can do—wait until you are asked to do something.

Give them time to settle in to becoming a new family!

And make your visit shorter than a week.  I would say three to four days max is the way to go.

Give the baby time to get to know mommy and daddy as well!

Other than that, I look forward to more and more pics of my little grandson.  Oh. And by the way, my “grandma” moniker still has not been chosen.  I think I’ll allow Owen to do the honor!

What will he call me?  Granma?  Granny? Grammy? Glamma?  Just as long as he doesn’t call me late to dinner!

Far from perfect, but enjoying life as a non-perfect and flawed individual at 60 years young. I'm still wondering what I'll be when I grow up! The characters in my life's screenplay include my better half. He is a refined Frenchman who grew up in Paris and summered in St. Tropez. I grew up in Long Island and summered in Long Island. I am not refined. My three grown children are also a big part of my life. For their sake, they happily live where their careers have taken them! But I can still mother them from a distance! I write about the mundane. I write about deeply shallow issues. But whatever I write or muse about--it'll always be a bit on the humorous and positive side! It's all good!
View all posts by Catherine →
This entry was posted in Uncategorized and tagged Baby boomer life, Grandparents-to-be, New Grandma. Bookmark the permalink.

50 Responses to You May Now Call Me…Grandma!