A Meetup of Empowering Women and A Feeble Attempt at Networking

From my last post, you might’ve gotten the drift that I attended a meetup this weekend.

I did.  It was hosted by a group that I found out about through a few bloggers.  The group is Forever Fierce:  The Midlife Revolution.  It’s is geared to the mature woman and has quite the following—over 3,000 members. That’s a lotta empowerment!

Ladies.  It’s a public group. Check it out and join!  It’s fun to be among our peers!

The meetup was organized by Eugenia Hargrove, creator of the blog “The Age of Grace”.  Eugenia gets a special shout out because she was so incredibly welcoming.  If she organizes a meetup in Philly, I wanna be her assistant!

Eugenia Hargrove, blogger and organizer of this event.  And a very welcoming woman!

Anyway, I mulled about attending.  In the first place, I suck at networking.  Actually, I have never even attended a networking event. I don’t even know if this was a networking event or not. I think it was.  If it was, I still sucked.  I’m socially awkward.

Before my divorce I was always extroverted, but through life changes, and my moves from NYC to New Jersey and then the suburbs of Philadelphia, I got weird.  My outgoing personality changed. And while I’m not exactly an introvert—I just began to internalize and I’m still that way.

Back to the meetup.

I was going back and forth.  I’m not going. I’m going. I’m not going. Then I read two blog posts from “Not Dressed as Lamb” The posts?  Why You SHOULD Do Things That Really Scare You and Why It’s Always Good to Admit You’re Wrong. I’ll tell you, I don’t know what it is but the more I read Catherine Summer’s, NDAL blog, the more I like it. She tells a good story. 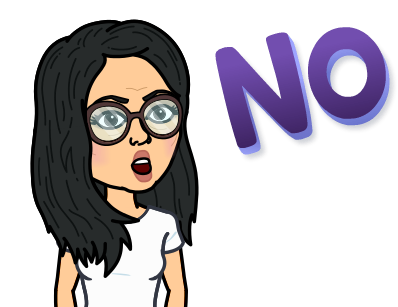 The “No” word kept popping out of my mouth when I discussed going to this meetup with myself.

Then I realized one of my favorite bloggers, Michelle of “Shelbee on the Edge” would be there and she was very encouraging.  So, I decided to attend.

Bonaparte couldn’t have been any more supportive. He pushed me to go, drove me to the event and waited in the car for me the entire time.

It was my intent that if the meetup didn’t work out, we could drive downtown and just hang for the day. Or since we were in my old neighborhood of the Upper West Side, perhaps we could just spend a couple of hours at the Museum of Natural History and grab a bite to eat.  Unfortunately,  my son, Roman, was working at SNL for the night’s taping so we wouldn’t be able to see him, but nevertheless, it was a day in the City.

Photo by Kenya Pickles Jones. Some of the women at the meetup.  L. to R.  Dawn Bell Solich of Plumage 59; Michelle the cutie of Shelbee On The Edge; Cherie Peake James (Shoes) of Style Nudge; Eugenia Hargrove of  The Age of Grace (and also of those killer red booties that really belong with me); Catherine Grace O’Connell of Catherine Grace O; Tracey Crockett of  Chic.Classy.Spicy; Kimberly Kepler Higgins of Kandidly Kim; Jannette Mercer-Braddock; Michele Wojciechowicz Clark of seechele_styles (Is that coat to-die-for or what?)

The event started at 2PM.  When we arrived, I spotted a group of women outside the Chico’s store where the event was taking place. I recognized Michelle and she was a cute and bubbly as ever.  I didn’t want to get out of the car.

Another fabulous photo by Kenya Pickles Jones.  My timeline is off because this photo was taken toward the end of the event.

When I tell you that I felt like that new kid at school who was petrified on that first day, I’m not exaggerating. Bonaparte, ever the father figure to me, gently told me he would be waiting for me but that I needed to go.  Memories of me standing in the schoolyard and being the last kid picked for punch ball floated through my mind.  Because of my crossed-eyes, I was never the athletic sort—and coming from a family of jocks—I could attest that I wasn’t exactly the favored child.

I’m that person.  And I have scars and a dental implant to prove it too!

Add to that, and the most recent rejections of my blog from “Like To Know It” and “RewardStyle” had my blogger self-esteem in the gutter.

Or was it simply that I would not be the center of attention that added to my anxiety?

I’m also that person.  Outstanding in my field. The center of my universe. In my own little world! Completely self-centered and very upfront about it.

I may have a point here.

The second I exited the car, I knew I erred in my choice of clothing. It was hot as balls.  My ensemble consisted of a fitted white tee, navy and discontinued J. Crew Minnie Pants, colorful paisley J. Crew Flats and a brand spanking new J. Crew Dover blazer. Did I mention this meetup was at Chico’s? 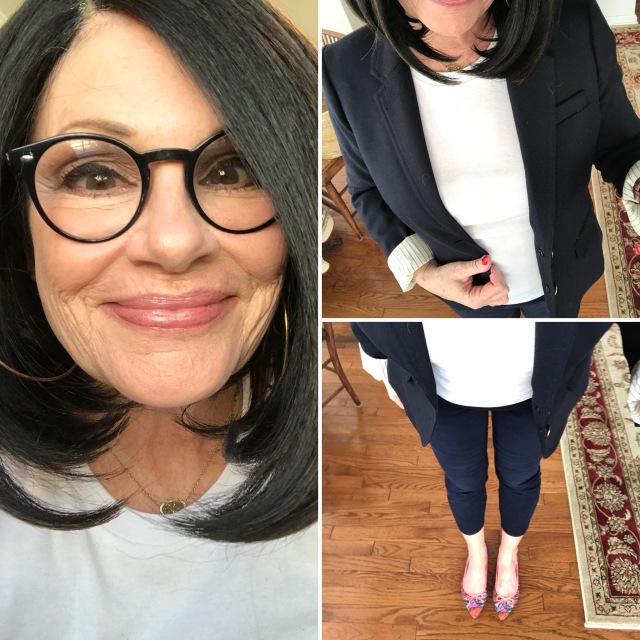 J. Crew head-t0-toe at Chico’s.  Well, not exactly HEAD.  I wore a Bobbi Boss wig. And it was sooooo hot that my deodorant failed.  I was the epitome of hot mess!

Visions of me melting like the Wicked Witch of the West played over in my mind. Yeah. It was that hot.

It was at this moment, that I figured I would be an observer of this meetup rather than a participant. But something happened.  Slowly, the observer in me started to disappear and the participant took over.

James, one of the photographers directing Kimberly and Michele to strike a candid pose. That coat though…

As soon as I let my guard down, the meetup began to be fun!!  I was thrilled to meet Michelle aka Shelbee on The Edge.   She’s even more adorable in real life!  I almost passed out when I met Cherie James, whom I have nicknamed “Shoes” because of the shoes showcased in her blog “Style Nudge”. The shoes.  I’m having a shoegasm just writing this! I also may have scared her with my overabundance of enthusiasm over her blog’s shoe photos! 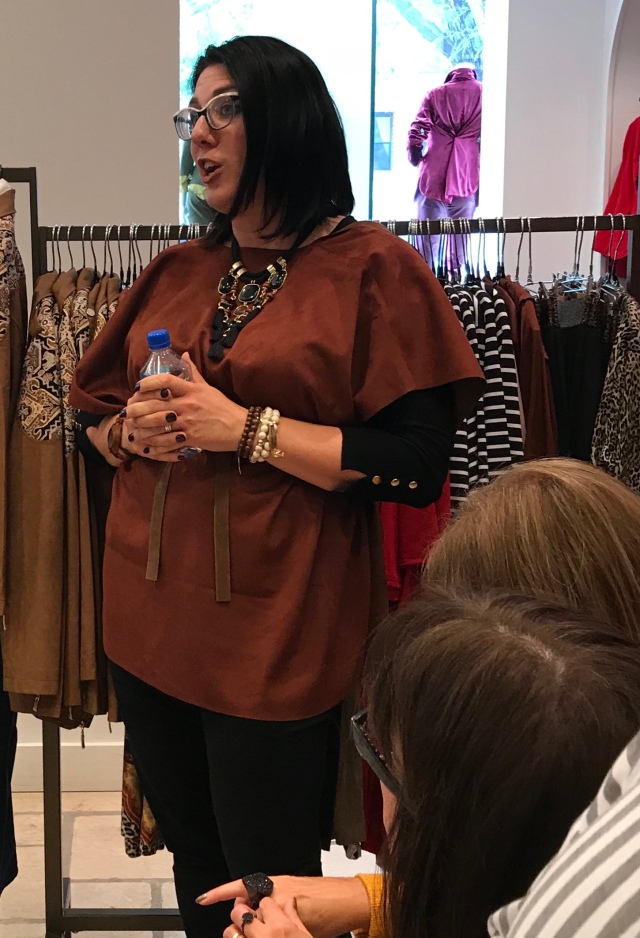 Michelle Montoro of Shelbee on the Edge.  She’s upbeat and adorable! And her blog is featured on my favorite reads page!

Eugenia Hargrove, the awesome woman who organized this meetup and she of the pointy-toed fierce red booties, was very welcoming and her blog “The Age Of Grace” was a delight to discover! 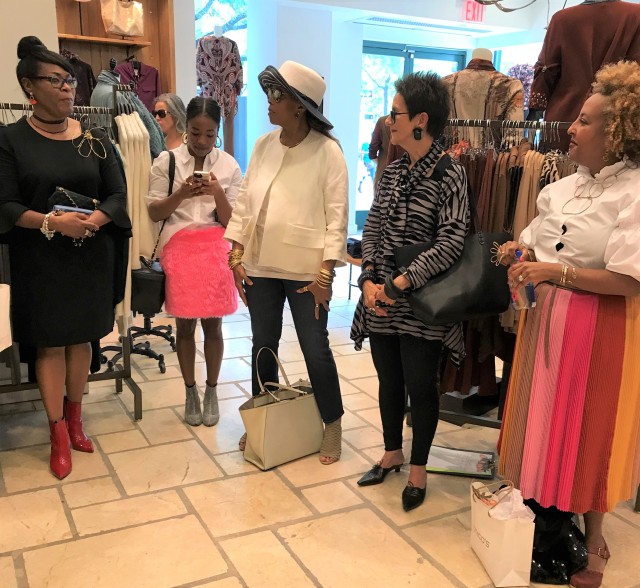 Left to right.  Eugenia Hargrove. Those booties., Eugenia’s daughter, the captivating Channing–she writes for Refinery 29! Brenda “Chapeau”  you have to take a look at her Instagam feed, @avalon_nyc  her photo with Sting!!  Diana Gabriel, a jewelry designer and featured in “Advanced Style”  (Let’s hope she never read my post about my advanced style. Remember that post?  It led Ari Seth Cohen to comment!) Her IG feed is fun though and she has some really nice pieces. @dianagabrielnyc  Lydia Gobena  @birabiro–she’s an attorney and jewelry designer.  I may need her lawyer services for when my big mouth gets me into trouble!

Meeting and speaking with Tracey Crockett of “ChicClassySpicy” was even more special as we both have quite a lot in common.

Tracey Crockett and another pair of killer red booties!!!

Victoria Flynn is the coolest woman ever and if I lived back in NYC, I would be visiting her at the Clinique counter at Macy’s at least twice a week!

Victoria Flynn has the best hair and best tattoos ever! If you are in Macy’s at Herald Square, go visit her at the Clinique Counter that she manages. She’ll give you great customer service!

Pat and Ginger—the two Bronx Bombshells and sisters that I met, put me back at home while we discussed life as city girls.  I love them.

Left to Right.  Me.  Pat Iturbe, Ginger Acevedo and Michelle Michele Wojciechowicz Clark. Thank you Victoria for taking this pic!

We also had the pleasure of a celebrity scriptwriter in attendance!  Caytha Jenthis, producer and creator of the hit Amazon series, “The Other F Word” (not the one you think—get your mind outta the gutta. It’s “fifty”).

Season Two premieres this coming Friday. And get this. JUDY GOLD is in the cast  and so is Henriette Mantel!  Lordie Miss Claudie.  She had me at Judy Gold! But Mantel–I’ve seen her years ago and she is a riot!

I can’t even write a sentence and Caytha Jenthis’ professional bio reads like the girl with the perfect SAT scores!   The woman is to be admired—that’s for sure!  What an illustrious career!!! And instead of my feeling like a complete failure, hearing  and reading about her career and her successes actually gave me hope for my own future!  WTF is happening here to me? Could it be I am becoming empowered by osmosis?

Now THIS is a successful woman! She writes. She does cool stuff. She produces. I may have found my inspiration.

In fact, all the women I met were empowering. They were bright.  Intelligent.  And all had a remarkable story.  It is wonderful to be with women in my demographic.  We can oftentimes forget just how strong and powerful we are. And we need to be reminded.  We need to support each other too.   I thank the women who took the time out to follow me on Instagram.  Maybe my blog will pick up a couple of followers too!  It’s all good!

We each received a gift bag stuffed with goodies and I won a $25 Chico’s Gift Certificate (Hmmm when will those leopard leggings go on sale?).

All this fun stuff!  A mask, cream, a book, my winning gift certificate and a bracelet..

This bracelet is the perfect way to incorporate animal prints as an accessory if  I just want a touch! Thank you Chico’s!

I may have gone in with anticipation and anxiety, but I exited feeling empowered and thrilled to meet up with quite the group of such stellar women!

Networking ain’t so bad after all! I think it was networking. I’m still not too sure! Maybe it was just having a good time!

Since I wasn’t really sure to go or not….The Clash!  Should I Stay Or Should I Go?  (I stayed!)

Far from perfect, but enjoying life as a non-perfect and flawed individual at 60 years young. I'm still wondering what I'll be when I grow up! The characters in my life's screenplay include my better half. He is a refined Frenchman who grew up in Paris and summered in St. Tropez. I grew up in Long Island and summered in Long Island. I am not refined. My three grown children are also a big part of my life. For their sake, they happily live where their careers have taken them! But I can still mother them from a distance! I write about the mundane. I write about deeply shallow issues. But whatever I write or muse about--it'll always be a bit on the humorous and positive side! It's all good!
View all posts by Catherine →
This entry was posted in Uncategorized and tagged Aging, empowering women, Humor. Bookmark the permalink.