Every now and then I’ll be inspired to write a blog based on another blogger’s post.  Yesterday I received the latest blog post from Catherine of “Not Dressed As Lamb”.  Her post,  Why I Don’t Go To London Fashion Week , touched on a subject that hit home with me.

From Milan Fashion Week.  Take that NY off the blazer, make the pants more fitted, wear with a different shirt and a smile, and a pair of pointy-toed kitten heels and this is a winner.  The second photo looks like Grandma from The Little Rascals (below)  I can’t even with the other two photos.  Very fashion weak. 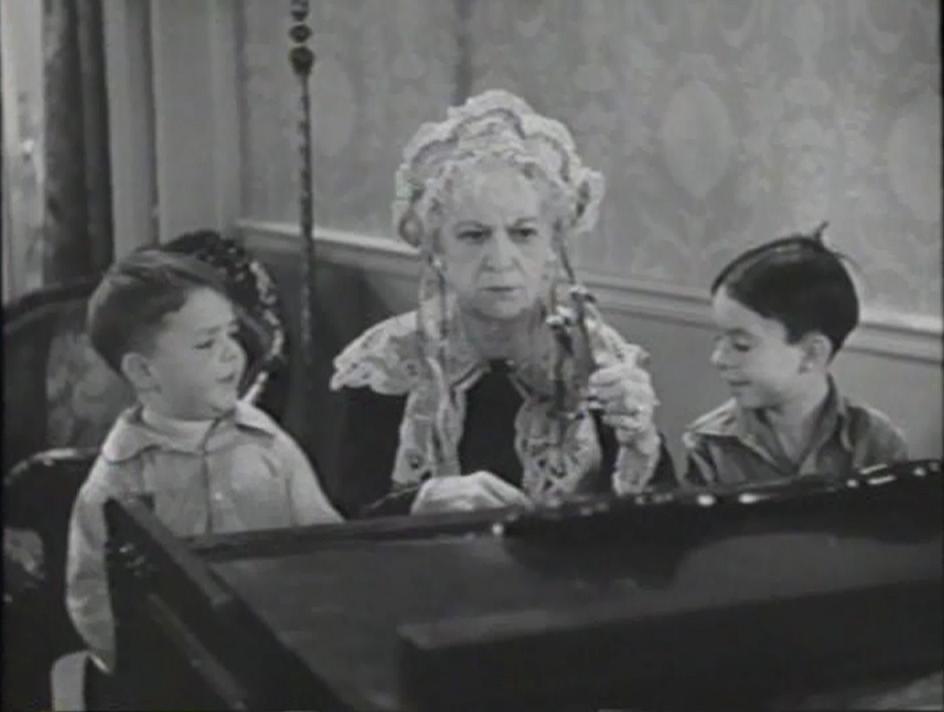 i.e. that second photo on top of this. That had to be inspired by Grandma!

As I’ve become older, and, I like to believe, more sage in my thinking, I’ve realized that fashion is something I don’t look at the same way I did when I was younger.

I remember spreading out on the living room floor on Sunday afternoons.  We attended Mass early in the morning, had our Sunday Roast dinner at exactly noon.  A bit of studying for school and then the enjoyment of taking the New York Times magazine and carefully reading about all the latest fashions of the times.  These articles would focus completely on the clothing and the designers. Mary Quant and André Courreges were my designer idols at the time. I was eleven years old, and at 62, both still remain my favorites.

I love this stock photo from alamy.  Mary Quant fitting a model. I would wear both of these dresses today!

And my favorite–Courreges!  This photo is from 1968 and I would be gloriously gleeful to have every one of these dresses in my closet now…

They speak to my style of simplicity!

Luckily for me, I have my revered Couregges hand-me-down that Bonaparte’s aunt, Daniele gave me..

….and here’s how I wear the bolero!

There was a time when fashion designers were revered because of their talent for constructing beautiful ensembles and their know-how with fabrics and draping.

Vintage Dior.  This timeless look is so feminine and beautiful and the draping is just gorgeous!

Then—in the 1980’s fashions started to change.  Slowly, it wasn’t just about the designer’s talent anymore but it was about designer-as-celebrity.  Fashion started to be about who was wearing the designs.  Enter the celebrities.  And this is where my interest started to wane.

Don’t get me wrong, designers were coming into their own in a different way. Designers were now becoming celebrities in their own right.  The focus was less about their talent and more about their social lives.  Halston was everywhere.  I remember being at a huge fashion event dinner—an event where Halston was attending and he had a circle of models around him the entire time.  The only time they weren’t at his side was when they were in the ladies’ room.

Halston–he’s the first true “celebrity” designer of the 1980’s that I remember but his clothing was so beautifully simplistic and not complicated! Damn. I would wear every single one of those outfits and the shoes and the belts!

Anna Wintour turned Vogue into a rag when she started putting celebrities on the magazine’s cover—which put celebrity in the foreground and fashion a step back.  And my girl Grace Coddington, despised celebrities on the cover—she wanted models (so did I)

And this all trickled down to fashion week.  No longer are the old-school socialites the important ones sitting in the front rows.  Now, you have the Kardashians, other Z-list celebrities, bloggers and influencers.  And yeah, I know, I’m a blogger.  But I, along with most bloggers, can’t even afford the high price of the fashions at fashion week.

Calvin Klein was fashion strong when he started the designer jean craze. Now he’s fashion weak with having the Kardashian sisters campaigning his underwear line.  Sorry Calvin, nothing is still coming between me and my jeans. And, when I buy drawers, I’m not buying designer drawers to ride up the crack in my ass!  The cheapies will suffice just fine!

Those tighty whitey panties remind me of when I was pregnant and ended up wearing my ex-husbands underwear because mine no longer fit.  Every day I prayed as I entered the subway that I would not get into an accident because the rescue workers would think I was a cross-dresser!

Or has fashion week been dumbed down to fashion weak?  I think it has.  What’s happened to Haute Couture?  Where is it hiding?  Mr. Karl—are you reading this?  Fashion has been dumbed down because there is no more elegance in fashion.  The sophistication level has hit rock bottom. The beauty of Haute Couture was that it could be easily inspired by mass-marketed clothing manufacturers and women in all age ranges could find a way to style those simple designs.

There is nothing beautiful or creative about this look.  It’s sloppy and pretentious and ridiculous. Fashion weak. Period.

I also wonder if true fashion has taken a turn for the worse due to the casual vibe of society.  Office casual (of which I am guilty of following), sloppy, slovenly attire at airports and en route in the air, pajamas at hotel restaurants.  I fear elegance is becoming extinct.

Runway fashions today are extra, overdone and just aren’t beautiful.  Although I have to admit, I do like a certain ensemble from Redemption.  In fact, I love it.

This ensemble from Redemption is gorgeous.  The only change I would make is the shoes.  This is fashion strong!

These days, I’m finding myself in love with smaller clothing companies like Sofistafunk The Skirt Company.  This company is a throwback to chic elegance with an edge and me and my style love that so much. Its as though the spirit of Dior returned with a very very modern vibe. I discovered this company on Instagram and immediately fell in love.

….SOFISTAFUNK!!   I’m so in love that I am ready to cry because this skirt makes me want to be back in NYC for good!

Look at that freaking skirt!!!  If I had a formal event to attend, I’m telling you, I would not think twice about one of these looks!

That middle pic, I would wear tight sateen ankle length pants with it for a 1950’s vibe.  Ms. McIntosh is great because she is designing for “everywoman” and not just a choice few!

Arlinda McIntosh is the creative director and founder of the Sofistafunk label and I’m almost jealous of her because –well, if I was a designer, I would design just the way she does.  In fact, I already have it in my delusional mind that when the time comes for me to be the mother of the bride or the mother of the groom, I’m wearing one of her  skirts and not the floor length either because I wanna move on the dance floor and shake moneymaker!

The styles are simple and not complicated and absolutely gorgeous and every woman from 18 to 98 can slay these items! That’s the beauty of McIntosh’s clothing. Man I hope her company is around for a long, long time! And no–I’m not being sponsored–I just love her stuff!

And that being said, my new runway is the carpeted aisle that separates the cubicles at the office.  I shall saunter and strut my stuff up and down that aisle in my very office casual way.

Here’s a look at some of my casual office looks from this past week.  The weather put a big damper on my desire to wear heels simply due to my clumsiness so I ended up wearing lots of flats!

I wore this dress with boots on Monday.  The weather started to get really bad…

I went plaid and wore these suede j. crew flats in the rain. Luckily they weren’t ruined!

My favorite long bob, Swami from Freetress gave me a great head of hair in the rain. I wore old clothes a years-old pair of Campbell pants from J. Crew and Repetto ballet flats. My nat et nin bag came out of hiding!

Another extremely casual look–hopefully next week I’ll dress up more!!!

My personal favorite look of the week.  White Uniqlo jeans, blue suede Via Spiga flats, an L.A. tee from J. Crew–I HAD to have it because of my son Jake’s move to Los Angeles from NYC!  I wore my beloved navy Schoolboy blazer from J. Crew and one of my favorite wigs–April from Bobbi Boss.  I dunno–I just loved this look!

Let me know what you ladies and gents think of Sofistafunk.  I swear to God, I haven’t been this knocked over by clothing in a long time.  Too bad Bonaparte has me on a no-buy for now because I need to rock one of those skirts!!  You can check out more beauties on her Instagram feed @Sofistafunktheskirtco

Oh…and this camo skirt!  I would love it even more in a shorter version but this is amazing!!!

Anyway, I gotta go.  I’m in serious need of a mani-pedi and face wax!  Those chin hairs have got to be taken off!!!!!

Far from perfect, but enjoying life as a non-perfect and flawed individual at 60 years young. I'm still wondering what I'll be when I grow up! The characters in my life's screenplay include my better half. He is a refined Frenchman who grew up in Paris and summered in St. Tropez. I grew up in Long Island and summered in Long Island. I am not refined. My three grown children are also a big part of my life. For their sake, they happily live where their careers have taken them! But I can still mother them from a distance! I write about the mundane. I write about deeply shallow issues. But whatever I write or muse about--it'll always be a bit on the humorous and positive side! It's all good!
View all posts by Catherine →
This entry was posted in Uncategorized and tagged Fashion, fashion week, Style. Bookmark the permalink.