Can We Just Let Summer Be Summer? Please?

While sitting in my car on the commute home from work, in the long parking lot known as 422, the worst road in the Philadelphia area, I glanced quickly at the dashboard and noticed that the outside temperature was 96 degrees.

And it didn’t surprise me because we are in the throes of summer.  I honestly think that people forget that summer—especially late summer is generally very hot. 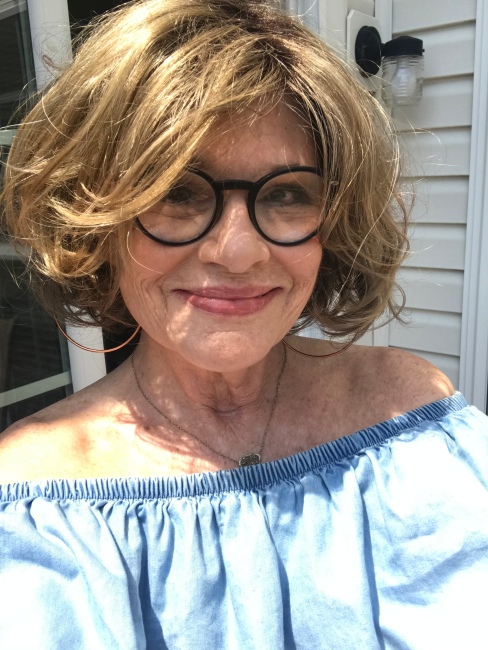 It’s hot and sweltering and I love it!!

It’s my kind of weather.

Don’t get me wrong.  I’m a four-season kind of gal.  Fact is, I love the seasons because each one has its own personality and each season has a special quality. Fall brings that first day of the year known as sweater weather.  There is something so glorious about the air that changes from hazy, humid and hot into crisp, cool and breezy.  It makes you feel alive and the colors of the foliage are vivid and bright and life is toasty. 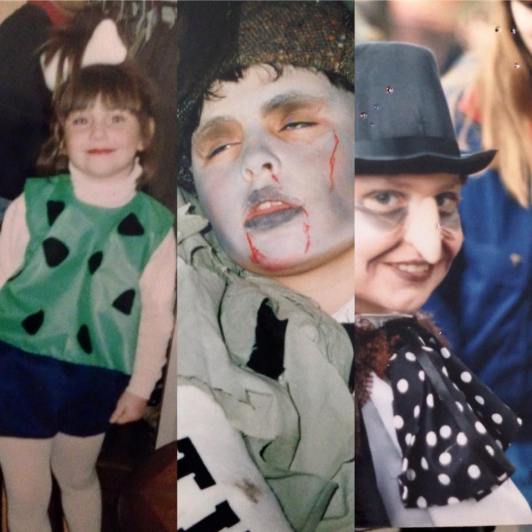 And Fall brings Halloween.  I’ll tell you, I loved making my kids’ Halloween costumes–it was my favorite thing about Fall! 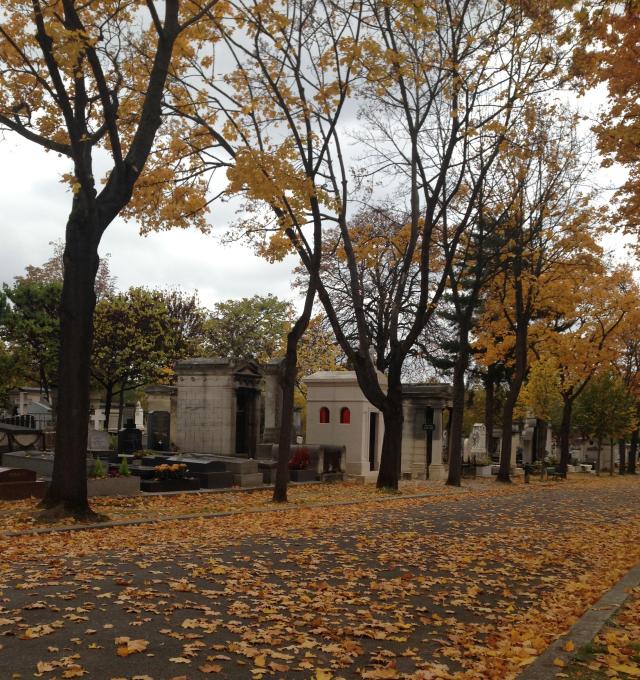 In October 2015, Bonaparte’s Aunt Daniele passed away.  I remember the Fall weather being much cooler in Paris than it was here and even though this is a photo of the cemetary in Montparnasse where she rests, this is one of my favorite photos of Fall.

Winter brings us The Holidays!  My favorite time of year.  Days are short and hot chocolate and tea are plentiful.  Sleeping with a ton of blankets is very comforting and it’s time for the stick-to-your-ribs food and al those wonderful baked goods and good cheer and family and friends! 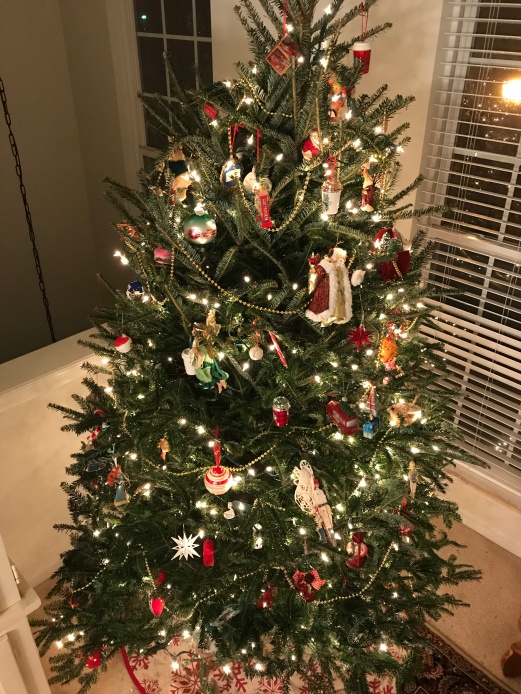 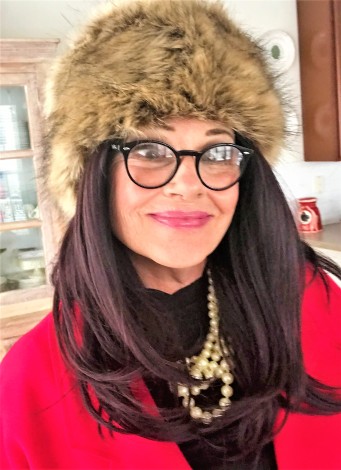 Worst part of Winter–having to put a hat and coat on just to run to the grocery store! 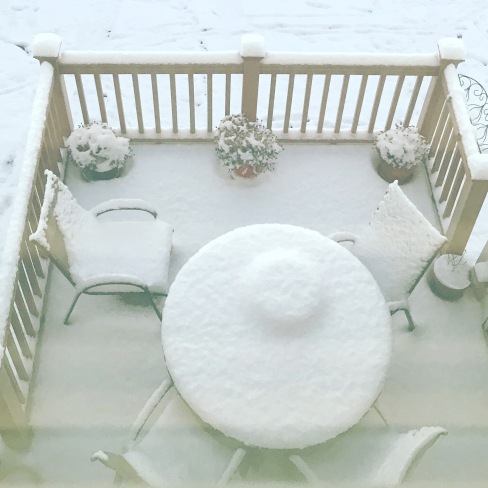 Snow may be pretty as it falls, but it turns into a slushy mess after a few days–and I miss sitting out on the deck! 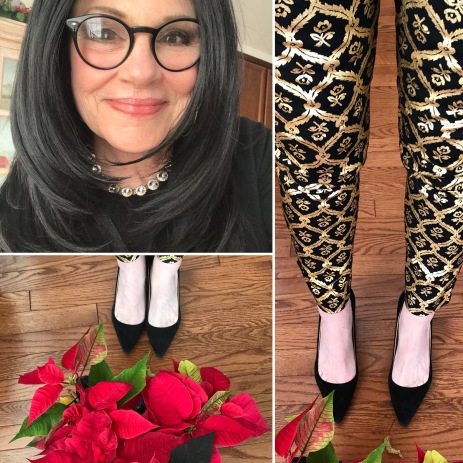 But Holiday Dressing Up is fun!

And just when we’ve had enough of sleet, snow and ice, Mother Nature gifts us with Spring!  I always get a happy, tingly feeling when I see that first sprinkling of trees in their Crayola Spring Green leaves!  The sun is warming up, flowers are blooming, people are out and about and happy that winter is gone for another year. 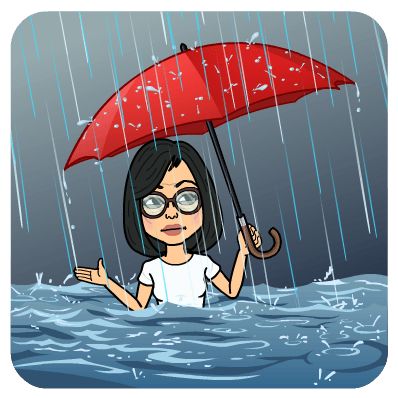 And those April showers in the Spring–they don’t bother me that much becawz….. 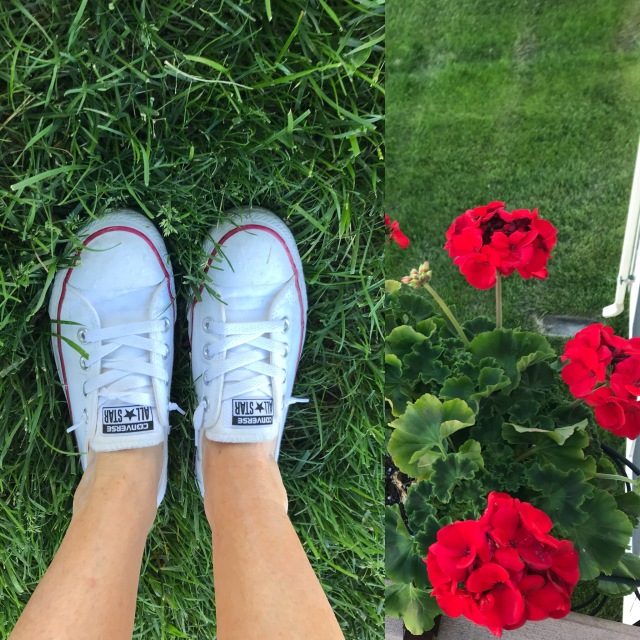 The grass turns green, we get to wear our sneakers outside without socks and the flowers start to bloom! 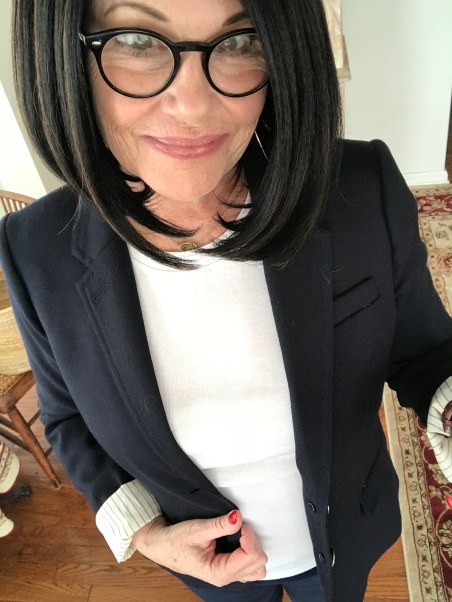 And–as in Fall, it’s the other season where I can wear my beloved blazers as outwear!

When Spring grows up, she turns into Summer.  And she’s one hot ticket!  Now’s the time to get rid of the shoes and dress your feet with sandals and flip flops.  It’s the time when Life’s a Beach! No coats, sweaters or panty hose needed—its time to bare those limbs!! 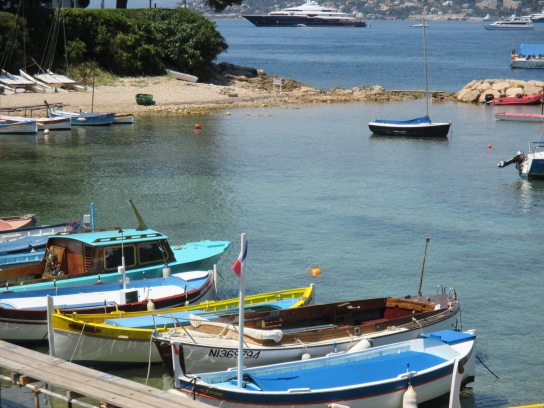 Ohhhhhhhhhh summer!  Boats and the sea… 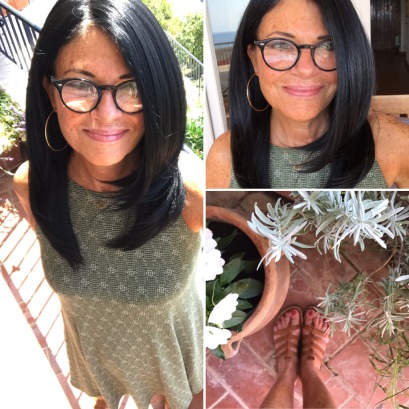 Tans (fake, of course) and dresses you can slip into.. 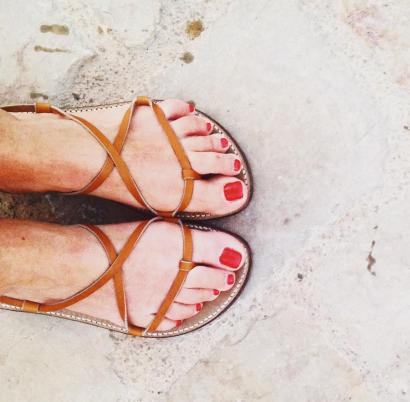 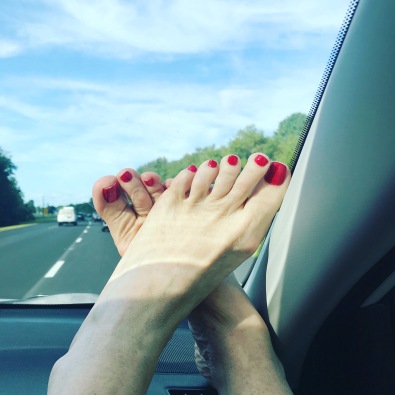 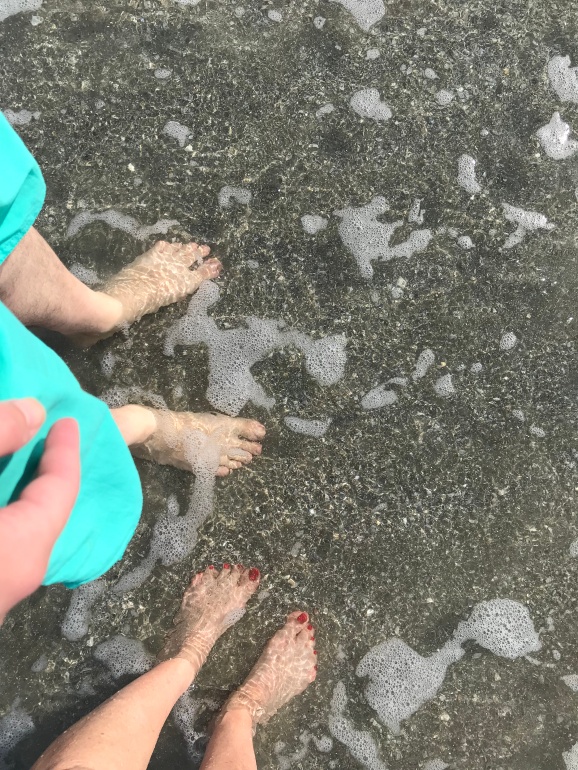 Oh yes. It’s true. I thoroughly enjoy each season for what it means to me.  So why, then, must we rush summer?  The other three seasons never seem rushed to me.  I’ll hear people saying that they can’t wait until Winter is over but not with the ferocity that they will complain about their hatred for summer’s end.

Why?  Why can’t we just let summer be summer? In three weeks, Autumn will be a knockin’ at the door and guess what?  It’s still gonna be hot outside!!! My cool/cold weather clothing will be packed away until the first true frost!!

Being home from work and nursing a cold yesterday, I read in the news that it was day that Starbucks released its infamous Pumpkin Spice Latte.  Sorry folks, but I won’t be ordering one any time soon.  I’m still in the Iced Tea/Lemonade frame of mind because it’s still summer!  I don’t even like pumpkin spice and everywhere I go from here on in, I’ll have to smell that artificial scent of pumpkin and those disgusting cinnamon-scented pinecones that give me headaches! 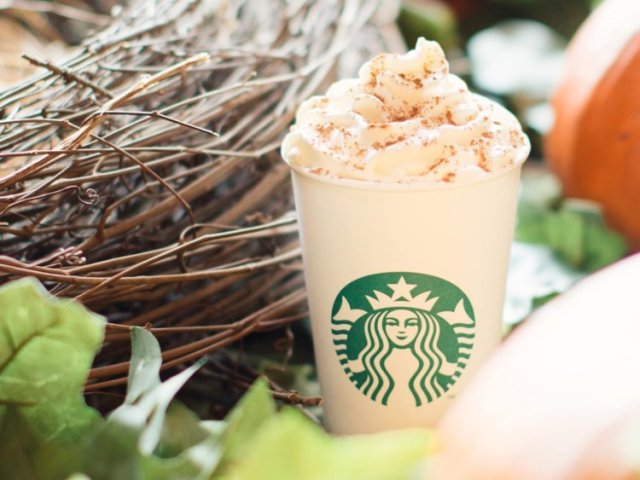 As much as I love Starbz (my “special” name for Starbucks),  I’ll stick to the Skinny Chai Latte.  I can’t stand pumpkin anything!

Wegmans has Halloween candy on full display.  Halloween is two months away—has anyone given any thought to the freshness of the sweets that’ll be passed out to the goblins, ghosts and superheroes?  It would make me feel so much better if the candy wasn’t put out for the public until at the least, September’s end. 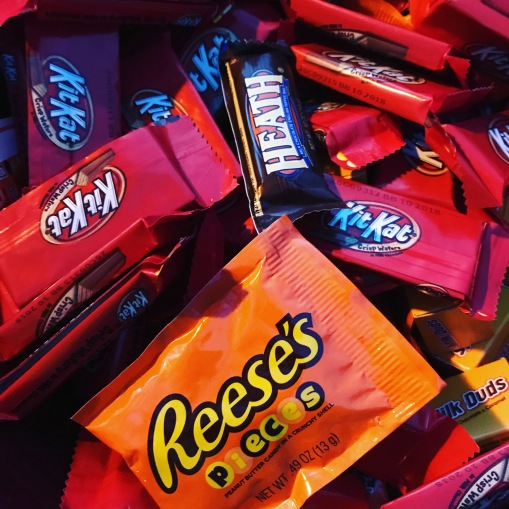 The worst thing is that if I bought this stuff now, I would eat it all!

Why is everyone talking about transition wardrobing when it’s this hot outside?  I am certainly not ready to make the switch from sleeveless comfortable swing dresses to long sleeves?  Please don’t even mention the heavily-textured fuzzy scarfs or boots yet.  My feet are enjoying being sensually bare or enjoying the freedom of sandals. 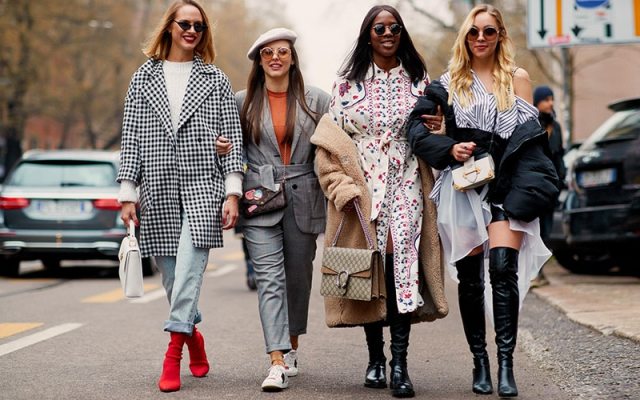 Here are some Fall 2018 Trends–and speaking of rushing the season, it looks as though this photo was taken early last spring–check out the foilage.  PS.  I am happy that I’m not this trendy!

The flowers—or rather the flowers I haven’t killed yet are hanging out in the sunny atmosphere.  My fake tanner is doing its job so pleasantly. 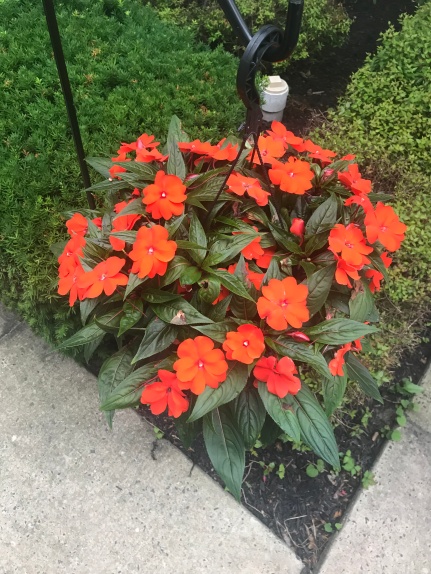 Our flowers are still enjoying the summer and they’ll stick around for a while!

As is the air conditioning in my car! 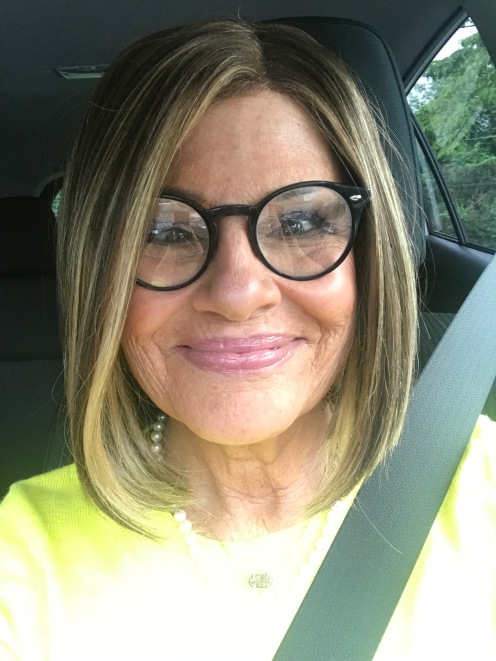 I would much rather be in an urban setting where I can take public transportation.  But as long as the A/C in my car works–I’m happy!

Earlier I was aghast while watching QVC.  Philosophy was selling some of their many bath and skin products and each one of them had a fall scent.  Apple Cider and Cinnamon Buns among the products and the hostesses of the show were getting all orgasmic about the “fall” scents of Apples and Cinnamon and they could feel the cold.  I would gather they were feeling the cold because the studio where they film is heavily air-conditioned. 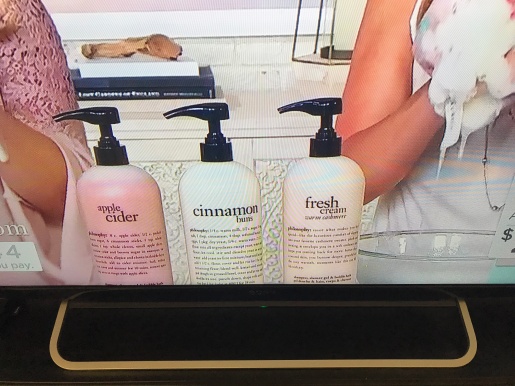 I had to take a photo of this because the women on QVC were going all porno-crazy over the apple cider and cinnamon bun scent.  Ugh.  Stop. Just. Stop it already!!!!!

Why rush the season?  Why rush life?   I think one of the worst things that could have ever happened was sending children back to school in August.  That’s one of the main culprits.  After all, back in the day, we started school in September.  After Labor Day.

You got that right.  I’m a firm believer that kids should go back to school in September!  Let ’em enjoy a full month of August!

People were still enjoying the last of the late summer days.  That last week in August was a time when families used to go on vacations.  Now they get ready to organize car pools for extra-curricular activities that the children will be taking part in.  Why?  Why can’t kids just be kids and enjoy the end of August doing nothing? 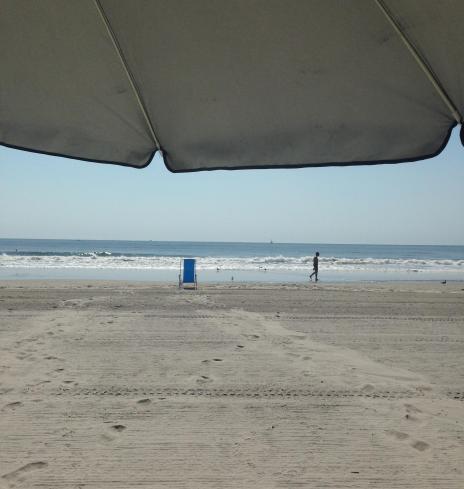 Get back to the beach one or two last times!! 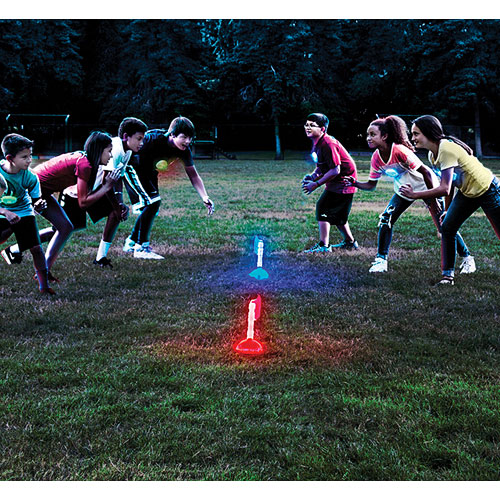 The hot summer nights were made for neighborhood kids getting together for a game of Capture the Flag or more fun.  Summer + Kids is a great equation!

This is the time when you can still enjoy the longer days and the hot weather.  You don’t have to put a heavy layer of clothing on just to run to the store to buy bread or milk or something that you forgot.  You aren’t stuck indoors because it’s too cold to go outside.  You can enjoy the scents of the great outdoors such as grass that is still being mowed or the scent of the ground after a rainstorm!

Enjoy that summer rain the way this little ladybug does!

So, let’s not rush it.  Enjoy the next three weeks as we bid farewell to Summer 2018 and welcome Fall!

Do the happy dance because soon it’ll be too cold to go outside dressed like this!

Speaking of seasons—how’s about a little Vivaldi??

Far from perfect, but enjoying life as a non-perfect and flawed individual at 60 years young. I'm still wondering what I'll be when I grow up! The characters in my life's screenplay include my better half. He is a refined Frenchman who grew up in Paris and summered in St. Tropez. I grew up in Long Island and summered in Long Island. I am not refined. My three grown children are also a big part of my life. For their sake, they happily live where their careers have taken them! But I can still mother them from a distance! I write about the mundane. I write about deeply shallow issues. But whatever I write or muse about--it'll always be a bit on the humorous and positive side! It's all good!
View all posts by Catherine →
This entry was posted in Uncategorized and tagged don't rush the seasons, four seasons, Summer. Bookmark the permalink.

26 Responses to Can We Just Let Summer Be Summer? Please?