Dealing With The Weight Gain. And Trips to the Doctor!

Last week I had my physical.  Things look pretty decent and I have to go for routine blood work but the worst part was getting on the scale.

The doctor’s scale always adds more poundage and they, at the physician’s office, do not allow one to get naked for weighing in.  Trust me, I have no shame in shedding any article of clothing in order to make my weight appear less than what it is.

And so, I had to get on the scale fully dressed and fully wigged! 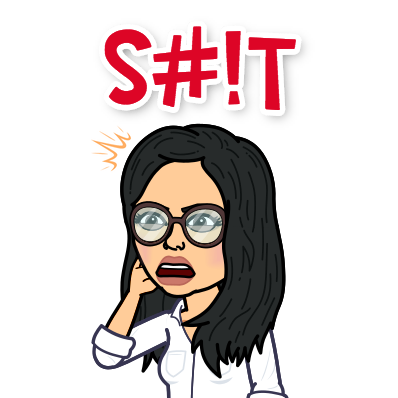 You can say that again!  Getting on the scale on the doctor’s office is unhealthy because they weigh you before they take your blood pressure!

I gained 15 pounds since the summer.

No—but I was disappointed in myself for being weak and giving in to some horrific eating habits which started approximately in late September throughout the Holiday Season!

Cookie dough.  Even better because the texture is so chewy and chock-full of fatty goodness!

For every cookie I bake, I eat a cookie’s-worth of dough!

And the cheese doesn’t stop here–I make a killer cheesecake!

Bread.  Bread goes well with cheese.  It also goes well with butter.  And is great for slopping up sauce.  Bread out of the oven is leaven heaven!  It’s comforting.  Carb-loaded and I ate a ton of it.

Home baked bread–it’s now purely for the husband because I haven’t had this leavened deliciousness in three weeks now!

My macaroni and cheese has the best of both worlds.  Pasta and cheese–is there anything better?

Those are just a few of the reasons that I gained the weight that I did. And to tell you the truth, the turning point was a pair of pants (OK. two pairs of pants and one pair of jeans) that I couldn’t zip up or close.

Food is comfort for me.  After a stressful day of work, food eases the weight (pun intended) of stress.  When I’m feeling a pity party coming on, particularly unhealthy food like a pint of ice cream, with chocolate sauce poured, not drizzled over the cold, creamy, delight, topped with whipped cream and salty nuts relieve the pity.

When my anxiety punches me, the best way to fight it back is with food.

And I need to stop relying on food for everything that ails me or as an emotional rescue!

Not only was this me when the doctor suggest I exercise, but it was also me when I had to have a Tetanus shot!

But wait!  There’s something else.

If you are a regular reader, then you kind of know that I worry incessantly about my health.  It’s obsessive.  And as lazy as I am about exercising, you would think that I hit the gym during my free time.  But I can’t be bothered. 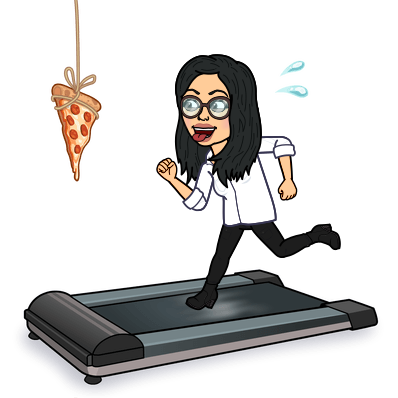 Now THERE’S a way to get me on the treadmill!

So anyway, I put off the blood testing because something happened.  I had a symptom. And let’s just say that this particular symptom had me calling up the colonoscopy doctor because I thought that perhaps my August probing should be moved up. 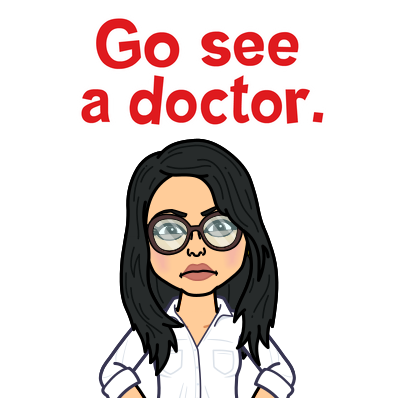 AGAIN!  One symptom can have me obsessing!

I was beside myself—thanks to Web MD and other online medical sites.  Not to mention I read about diseases every day at work. 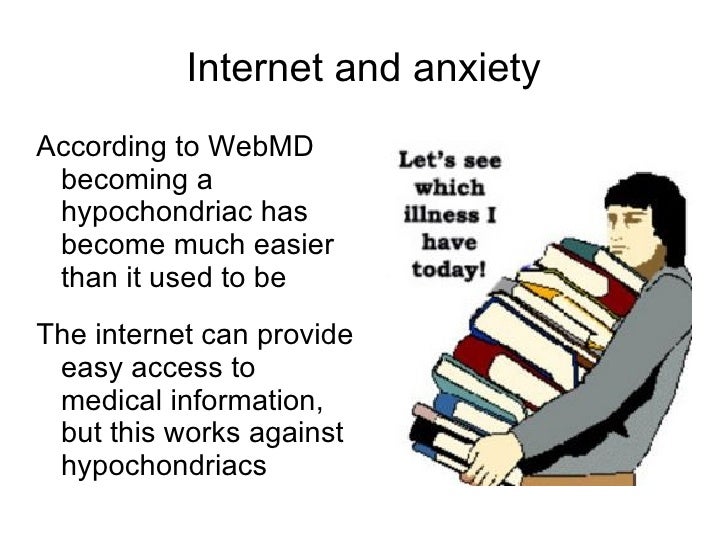 Probaby the ONLY thing Web MD got right!

The appointment was this morning and I made sure that I had my prettiest matching underwear on because—it’s that kind of doctor.

And when I arrived at the office, I was greeted with new insurance paperwork to fill out and a question.

The question being “May we take your photo for our Portal?”  Yes. Everything is online these days—even your doctor’s office.

Well—due to the rather sensitive nature of my visit, and because I only had one thing on my mind.  My face suddenly had a horrified look. And I was asked if I was ok.  My answer was an astounding reply…

No–a photo of my face NEVER crossed my mind!!

There were both looks of horror and women trying to hold in laughter as the receptionist assured me it was my face they wanted to photograph.  Hey. It’s a gastro/colon office—why would they want my face?

And everyone was all smiles as I further explained that my hair changes on a daily basis due to the wigs but my face remains the same.

This is the face and hair they got today!  I took a car selfie after I left the doctor’s office!

The outcome of the doctor’s visit?  My probing will still remain in place for August and I’m forbidden to go to Web MD—or any other medical site.

Seriously.  We can’t seem to get away from all this medical stuff—no wonder many of us are hypochondriacs.  It pains me to watch the news at night because every single ad is for medicine or some hospital specializing in critical disease.  These things trigger me.

And yes, I did have to get on the scale this morning.  On the coldest day of the year while wearing the heaviest sweater I have, heavy tights, and a wool kilt skirt.  But the great thing is that I weighed one pound less than last week during my physical.  I would say that if I had been stripped of all clothing, I would have been an additional pound less, making the total two pounds.  And doctor scales are heavier than home scales because at home I weighed 152 this morning and at the doctor’s office I weighed 156.

What I wore to the doctor today.  The coldest day of the year and I was bundled up in heavy-weight wool!

So yeah—I have a few pounds to lose and I’m doing fine with it.

I’ve completely cut out all white flour, bread of all kinds, sugar and baked goods.  No in between meals. No processed food.  I’m watching my portions but I’m not depriving.

Saturday night dinner is already planned.  Escargot and steak.  I’ve decided to stop formal dieting and just started to watch what I eat.  I’ll tell you I sucked food up like a Hoover during the holidays so now is a good time to get back to my comfortable weight—besides. I have a wedding to attend!

That being said, I’ve been lucky enough to fit into most of my clothing with the exception of those two pair of pants.  And I haven’t been posting what I’ve been wearing for quite some time.  And on this cold, last evening of January, I’ve decided to return to posting what I’ve always loved.

Here’s some of the clothing getting me through the weight loss!

I’m on a Kilt kick.  Yesterday I wore my favorite kilt because it’s the same plaid as my old school uniform.  I don’t know what it is but the skirt/tights/sweater/loafers combo remains one of my favorite winter looks.  And the skirt is expandable so it moves with my tummy!

Black–or any monochromatic tone of clothing always slims!  These stretch velvet pants are a great choice while losing the pounds.  I felt very Beatnik in this get up!

Three weeks ago I could not zip these pants up.  Now they fit–albiet snug but they fit!  Giving up bread and pasta have been a godsend in slimming the stomach!!

Another example of one-tone dressing.  Navy sweater, navy skirt, navy shoes!  I fake tanned the legs because I hate pantyhose. This was before the weather fell into the single digits!

A favorite Saturday Look!  This olive-green sweater I bought at J. Crew Factory earlier in the season has been my most-worn sweater this winter.  I love loose jeans a snugly sweater and loafers!

This loose sweater hid some overflowing muffin top on the pants that got a bit tight!

Casual Friday at the office…..

And slightly dressed up with a velvet tee and a plaid lady jacket!  This is where jeans with stretch are your friend.  You can gain a few pounds and the jeans will stretch with you!

So that’s it for now. I have a few new makeup/skincare items that I’ll be writing about this weekend!  Have a great evening!  And don’t read Web MD!

Have a great evening!

If you have any weird doctor visit stories–by all means!  Share them in the comments!!!!! XOXOXOXO

Far from perfect, but enjoying life as a non-perfect and flawed individual at 60 years young. I'm still wondering what I'll be when I grow up! The characters in my life's screenplay include my better half. He is a refined Frenchman who grew up in Paris and summered in St. Tropez. I grew up in Long Island and summered in Long Island. I am not refined. My three grown children are also a big part of my life. For their sake, they happily live where their careers have taken them! But I can still mother them from a distance! I write about the mundane. I write about deeply shallow issues. But whatever I write or muse about--it'll always be a bit on the humorous and positive side! It's all good!
View all posts by Catherine →
This entry was posted in Uncategorized and tagged doctor visits, Fashion, Humor, outfit of the day. Bookmark the permalink.

40 Responses to Dealing With The Weight Gain. And Trips to the Doctor!