I Passed on The Oscars–But I Saw That Slap!!!

Ahhh yes. There used to be a time when any major award show was a “must watch” for me.

The Golden Globes. The Emmy Awards. The Grammy’s. The Tony’s.  And the mother of all award shows…The Academy Awards!

I used to lit-uh-ruh-lee plan my entire day around Oscar! No more!

I would begin my Oscar countdown by watching Joan Rivers on the red carpet.  And I loved her wit, sarcasm and her accolades when they were rarely deserved. It gave me such pleasure to see her put such self-important act-oors in their place. And of course, it was all about the hair, the makeup, and what the entertainment world was wearing—or not wearing!

I miss my Joan. She was the greatest thing to ever happen to awards shows. She must have been rolling around in her grave over last week’s ceremony!

A few years back, I would gloriously review these shows on the blog.  And might I add, there was always praise, and snark and a few jokes made regarding ensembles that ran from beautiful, to garish and downright whore-ish.

Kirsten Dunst from my 2017 look at the Oscars. Hands down. She was THE best dressed that year! I LOVE this entire look!

My first “red flag” that the awards environment was shifting was the banning of Ricky Gervais from hosting The Academy Awards after he did a remarkable job of poking fun at the self-righteous, narcissistic, self-important actors who –well, basically are fuller of themselves than being full of sh*t! (It’s still Lent)

Of all the Oscar hosts, I’ll take Gervais. He was greatness and I if he ever comes back as host, I’ll be watching again!

And then we had Covid. And then came onto a new phase of award shows. Somewhere along the line, people became offended at the slightest remarks, made in fun about anything from clothing, to hair, to shoes to makeup…and the list goes on.  Folks became uber-sensitive.

Comedians, who actually made pretty funny jokes about the actors in the audience, were seemingly put at bay. Instead of “roasting”, it became a politically correct “toasting”. People found comedy “offensive”.   The Oscars, in particular, were becoming a platform for politics as opposed to a night of fun, happiness, and laughter—at one’s and others’ expense.

Currently, the uber-sensitive would despise these roasts, I happen to think they are hysterically funny. If you lack the ability to laugh at yourself, you lack a sense of humor.

This gold AMEX dress goes down as one of the tackiest ever!

And I want a chuckle.

And this getup just made me laugh. It still does!

The Frenchman and I opted to not watch the Oscars Sunday night simply because I no longer have the patience to watch any form of narcissism. I cannot tolerate self-importance and, instead, we watched The Righteous Gemstones. I needed my fix of Uncle Baby Billy.

Uncle Baby Billy is far more interesting than any award show. And those teef!!!!!

To be honest, I was hoping that Troy Kotsur, who played the father in CODA,   would win for best supporting actor.  I was also hoping CODA would win for best picture. I wanted Questlove to win for Summer of Soul and lastly, Kenneth Branagh for anything to do with Belfast.

All four of my hopes came true.

And CODA won Best Picture! I was four for four!!!! Too bad I’m not a gambler!

But I missed the dramatic turn that brought the Oscars to a sudden halt for a few minutes.

When Will Smith slapped Chris in, what is now called “The Slap Heard Around The World”. 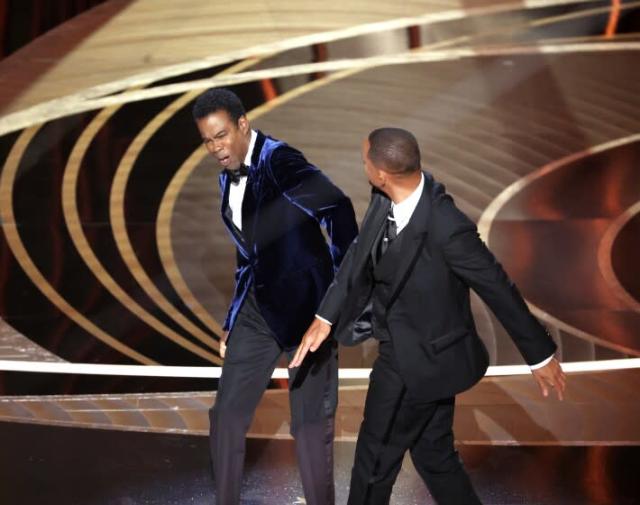 And from seeing footage of the circumstance, and reading about the incident hundreds of times since last Sunday, I must put my two-cents worth in.

We have Chris Rock. Mr. Rock is a comedian. He is a very funny comedian. His standup is very funny.  He was great on SNL. He is great in movies. He’s talented.

From his start on SNL to his guest-hosting, Chris Rock is a very funny guy!

We have Will Smith.  He used to rap with DJ. Jazzy Jeff.  He used to be The Fresh Prince of Bel-Air. Which, by the way, was a really great show. My kids loved it! Then he became a star of movies, and his star kept rising.  Pardon me for saying, but I also think as his star rose, he became quite full of himself. That isn’t to say he’s not talented. He is.

Fresh Prince of Bel-Air was a great family show. I watched it with my kids–and I admit that Carlton was my favorite character. I hope Will Smith doesn’t assault me for saying that!

And we have Jada Pinkett-Smith.  She was in one of my favorite shows from the 1990’s: A Different World. She had hair. Now she doesn’t have hair. She, too, is a talented actor.

Another great family show was “A Different World” which I also watched with my children.  The then Jada Pinkett was great in it. Shhh. Don’t tell her that Jasmine Guy as Whitley was my favorite from the show or Jada will do the eye-roll and side eye and her husband will slap me!

On Alopecia:  There are various degrees ranging from temporary to extremely severe.  Overall, it isn’t life-threatening. Devastating?  Sure.  But any form of hair loss is devastating at first. Then you get used to it and either wear wigs or shave your head.

A diagram of female androgenetic alopecia 1–or female pattern baldness. Either way,  five of these drawings call for a wig to be worn. Just my opinion.

Jada shaved her head. And quite frankly, she looks beautiful with a shaved head. And might I add, she isn’t completely bald. There is growth on her shaved head.

Not gonna lie. She looks beautiful. She looks gorgeous with her shaved head. The dress is stunning.  The shoes? I would have rather seen her in pointy-toed, toe-cleavage bearing shoes. Don’t tell Will or he’ll slap me.

It is also a fact that Mr. and Mrs. Will Smith have what is known as an “Open” marriage. Meaning they can do the bouncy-bouncy with other people than each other. The fact that this is openly discussed by both-especially Mrs. Smith I find to be too much private information and bordering on vulgarity.  But that’s just my opinion.

Personally, I don’t think we, the public, need to know about their open marriage. That is their business. Ugh.

The Oscar ceremony is a chance to give accolades to those who have worked hard.  Hosts joke and poke fun.  Bob Hope did it.  A lot. When Ricky Gervais did it, he was booted from ever hosting again. Too bad. I love him.

As much as I love Gervais, I do believe Bob Hope was the greatest Oscar host of all time. I remember watching him from childhood to adulthood and he poked fun at everyone. Thankfully Will Smith wasn’t born yet or he’d slapped Mr. Hope!

This year Chris Rock made a reference to the movie “GI Jane”.  Demi Moore starred in the movie. She sported a shaved head. Her shaved head was akin to Jada Pinkett Smith. They were twinning!  Chris Rock’s joke.  He didn’t say “Hey, what’s the difference between Jada Pinkett’s head and a cue ball?”  He didn’t say “Hey Jada, why aren’t you wearing a wig? Isn’t your head cold in this air-conditioned building?”

Oh. Look! Demi Moore has a shaved head. For the movie “GI Jane”!

Nope! He merely made a remark about her starring in G. I. Jane 2 due to the similar hair style. Period.

Oh look! Here’s the REFERENCE Chris Rock made. It wasn’t mean-spirited. It wasn’t vicious. It was a JOKE!!!!

And it was amusing. Not in a rolling-off-the-sofa-laughing kind of way, but in a chuckling smirky kind of way.

And Will Smith laughed.  And appeared to have enjoyed the little reference-as-joke.

At first–he laughed. And a hearty laugh it seemed to be…

Then he saw his wife’s eye roll and side eye.

And all of a sudden, he started spewing the eff word (it’s still Lent and I’ve been good). And he ran up on stage and slapped Rock clear across the face.

It was a disgusting display of assault. And worse than that, when Smith won his award for best actor, the phony Hollywood elite gave him a standing ovation.

What a pathetic creature Smith is.

A standing ovation he clearly did not deserve.

Whaaa Whaaa Whaaa. A most narcissistic, self-serving display of patronizing and insincerity.

It remainsastounding to me how a knowingly group of mostly liberal, peace-pontification people can yap about anti-violence then moments later give accolades and an ovation to a self-serving, self-righteous, self-important, narcissist, who executed an act of violence that was televised for the world to see. 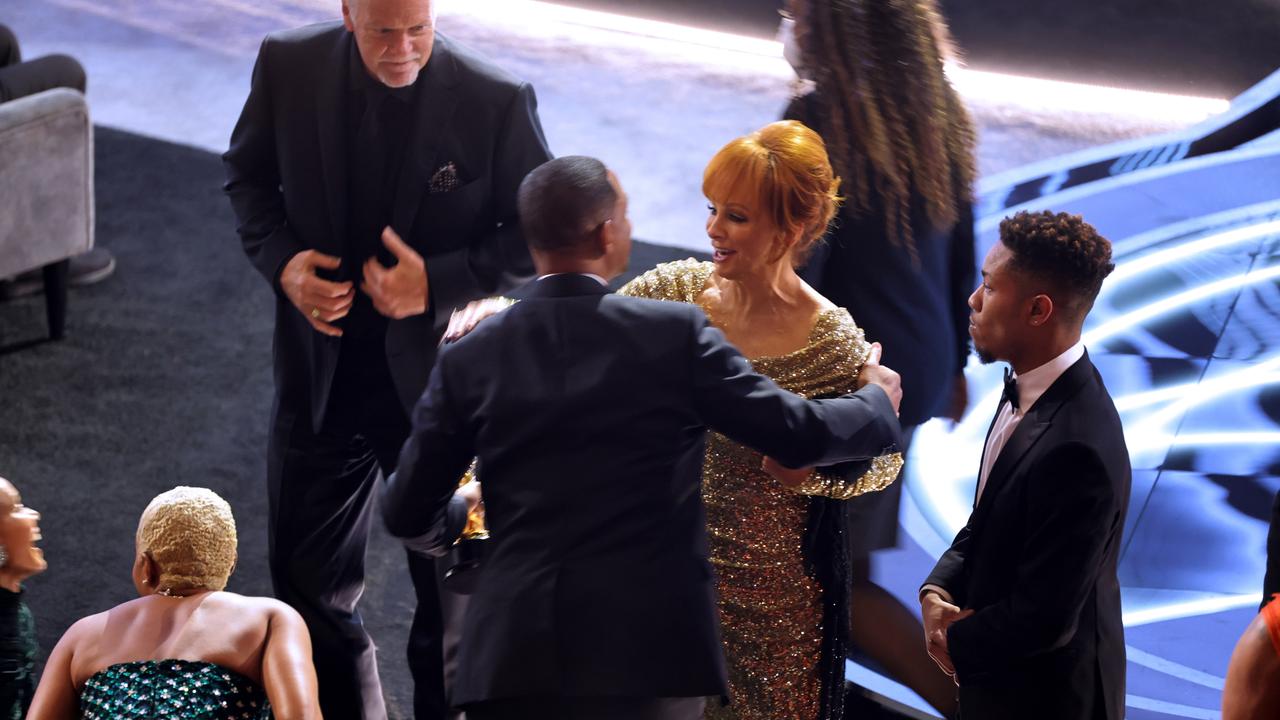 …and lest we not forgot those fawning over this assaulter

Let’s add to that his innate and selfish ability to take the glory away from Questlove and other winners.

I was thrilled that Questlove was able to discuss his Oscar win on Fallon and happy that my son got to see this live!

Smith is a tool.  His wife, with her side-eye and openly speaking of her extra-marital events is no better.

So that’s it. What will happen with Smith’s career? I honestly don’t care. What about Rock? I’m happy that his stand up is still going strong. And Mrs. Smith? I don’t care either.

I’m happy that Adam Sandler and others have Rock’s back after this event.

I’m glad my favorites won Oscars and I’ll end it at that.

A week later and what do you think?

40 Responses to I Passed on The Oscars–But I Saw That Slap!!!